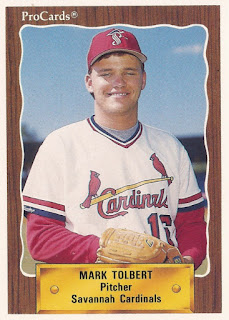 Mark Tolbert had a good enough day at the plate in this August 1987 game, but it wasn't nearly enough.

Tolbert hit two doubles and had an RBI for his Taylorsville American Legion team in the regional Legion playoffs. But his Taylor team, the Utah state champions, fell to Las Cruces and were eliminated, The Deseret News wrote.

Tolbert went on from Taylorsville to turn pro two years later. His pro career ended up being brief. He played just two seasons.

Tolbert's pro career began in 1989, taken by the Cardinals in the 49th round of the draft out of Dixie State College in Utah.

Tolbert went to Dixie State out of Taylorsville High School. During his tenure at Taylorsville High, Tolbert hit .522. It was still the fifth best mark in the state in 2009. He took his team to the playoffs in 1987, helping out on the mound, too. He gave up seven hits in one game, four in his final frame.

With the Cardinals, Tolbert started off in the rookie Arizona League. He also turned full-time pitcher. He got into 29 games in relief, posting a 3.30 ERA. His 29 outings are tied for the most by a pitcher in an Arizona League season.

Tolbert then played 1990 between four different teams for the Cardinals. He played at short-season Hamilton, single-A Springfield and Savannah and high-A St. Petersburg.