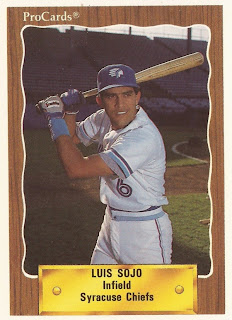 He was a utility man, ready to come off the bench to provide that crucial hit whenever needed, something Sojo had learned in the course of his decade-long big league career.

"When the game starts, I don't just sit there and relax," Sojo told The New York Daily News as the Yankees looked to close out Oakland in the division series. "I always say, 'They may need me in this game.' "

As the Yankees moved on to the World Series, there was a need for Sojo, in the ninth inning of Game 5. Coming on in a double-switch an inning before, Sojo came up with two men on and two outs, smacking a single up the middle.

Two runs would ultimately score, turning a tie game into a 4-2 Yankees win and a 4 games to 1 series win.

"This is the happiest day of my life," Sojo told The New York Times. He added later, ''I thought I might have to retire. And here I am talking to you guys and having a great time. We are going to have a big party tonight. I will enjoy every moment."

He made his major league debut in July 1990. He played 33 games for the big club that year, hitting .225 with one home run. Aug. 31, Sojo hit that home run, and knocked in five runs. He did it after starter Tony Fernandez got hurt.

"It happened real fast," Sojo told The Associated Press after his 5 RBI effort. "Tony said he was hurt and I came in."

That December, the Blue Jays sent Sojo to the Angels in a six-player deal. With the Angels in 1991, Sojo got into 113 games, the most playing time he would see in a single season.

He hit .258 with three home runs that year. The three home runs all came in a seven-game span, in August. That September, Sojo was called on to bunt in the winning run, and he came through.

With the Mariners in 1995, Sojo hit .289, the best average of his career to that point. To The Los Angeles Times, Sojo attributed that success to losing weight. His weight was why the Blue Jays and Angels traded him in the first place.

He was also having a great time, helping the Mariners to a Game 1 ALCS win, The LA Times wrote.

"I go in restaurants and people shake my hand, tell me I'm doing a good job," Sojo told The LA Times. "It's a great feeling. I've never had that feeling before."

Taken by the Yankees off waivers the next August, Sojo had that feeling many more times. Sojo never got into more than 77 games in his three full years with the Yankees, he got into six World Series games.

In 1999, though, he had to miss part of the series. His father died. But he was back and available for Game 4. "I feel great because I know in his mind, he's going to be with me," Sojo told The New York Daily News after returning to the team. "He's going to support me because he wanted me to be a baseball player my whole life. It's going to work out good."

Signed by the Pirates for 2000, Sojo returned to the Yankees in that trade later in the year, in time to get that game- and series-winning hit in Game 5 of the World Series.

Sojo played 39 more games for the Yankees in 2001, then returned for four more in 2003, ending his playing career. He has since gone on to manage at Norwich, serve as third base coach in the Bronx and manage at single-A Tampa. He coached at AAA Scranton in 2014. In 2015, he is serving as assistant field coordinator for the Yankees.

In 2006, he was at Tampa watching over young Brett Gardner.