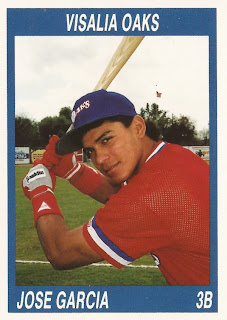 A new team and a new position and Jose "Cheo" Garcia's prospects were looking up.

He had spent five seasons in the Twins organization, helping AA Orlando to the 1991 Southern League championship. But he'd only gotten a taste of AAA ball.

With the Red Sox organization in 1993 he'd gotten to spring training and played well enough to be assigned to AAA Pawtucket.

By August, the prospects were still there, but Garcia had been slowed by injury.

''Since he has come back from the disabled list, Cheo has done a good job for us,'' Pawtucket manager Buddy Bailey told The Orlando Sentinel, the paper checking up on its Orlando alum. ''Hopefully, he can stay healthy the rest of the way and help us get back in the pennant race.''

The Venezuelan native was originally signed by the Twins in 1988. He began his tour of the Twins system at rookie Elizabethton, hitting .259. The next year he was at Kenosha hitting .235, then it was high-A Visalia for 1990, where he hit .274.

Garcia played in three games for the Twins AAA club in Portland in 1992. But it was also after that year that Garcia was given his release.

With Pawtucket in 1993, Garcia stayed healthy enough to play in 96 games, hitting .260. He didn't get called up to Boston. And he didn't get another year as a pro. His career ended after six seasons, without making the majors.