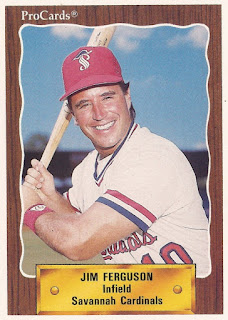 The Salt Lake Trappers rattled off its record 29 straight victories in 1987 and Jim Ferguson was right in the middle of it.

Ferguson hit .327 for the independent club that year. He'd earned a starting job with two key early hits, according to The New Haven Register.

"It was probably the best summer of my life," Ferguson told The Register years later. "We went out every night with something to prove to ourselves. We knew we could play, but we felt we had to show everyone else."

Ferguson's career started that year, signing with the team as an undrafted free agent. He showed enough that year to sign on with the Cardinals for 1988. He went on to play three seasons in the St. Louis system. He never made AA.

Ferguson signed with the Trappers out of the University of New Haven in his native Connecticut.

At New Haven, Ferguson helped his team to postseason appearances in each of his four years, including three trips to the Division II College World Series. He hit .413 his junior year and .269 his senior campaign. He made the college's Hall of Fame in 2013.

For No. 23 of the streak, Ferguson hit one of his three home runs on the year, helping the Trappers mount a six-run comeback to win, according to The Deseret News. Ferguson was even one of two Trappers to be named athlete of the week by ABC's "Wide World of Sports," The News wrote.

With the Cardinals, Ferguson was assigned to single-A Savannah. He hit .223 in 103 games there. He knocked a two-run double in a 1988 game.

He returned to Savannah for 1989, improving his average to .251. He also stole 18 bases. He knocked a game-winning single in an April game.

Ferguson spent a third season at Savannah in 1990. He also got six games at high-A St. Petersburg. Overall, he hit .217. It was his final season as a pro.