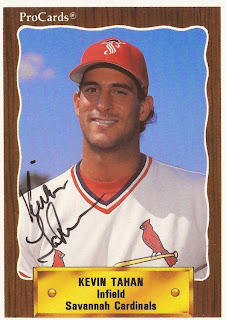 He'd played three seasons at Stanford, but hardly got into game action. With the Cardinals, he played five seasons, only seeming to make AA as a possible coaching candidate.

So, when he called and asked for his release at the close of 1993, he was comfortable with that.

"It was one of those things where, had I not gone through it at Stanford once, I probably wouldn't have been quite as confident to pull the plug and try and make another go of it in my own way," Tahan recalled to The Greatest 21 Days recently.

"If I'm not going to make it," Tahan recalled thinking, "it's going to be on my terms."

Tahan's terms included an ill-fated first trip to play in Taiwan and a new career in independent ball in the United States. It also included a return trip to the Asian island and a winter ball stint in Colombia.

By the time he was done, Tahan has 10 professional seasons in the books, all after starting his career at the age of 22.

Tahan spoke to The Greatest 21 Days recently by phone from his San Diego-area home. He covered his career from a youth until his pro career's end nearly 10 years after it began.

His final Cardinals season came that year in 1993, used sparingly at AA Arkansas. His affiliated career over, Tahan heard about an opportunity in Taiwan.
A friend of his, Wally Trice, had played there in 1993 for the Mercuries Tigers. Trice talked with the team and got Tahan a contract, Tahan recalled.

It wasn't until later that he learned what exactly Trice had told the club: That Tahan was a shortstop. Tahan wasn't a shortstop.

"It was pretty funny," Tahan recalled, "although they didn't think it was that funny, the money they spent to get me there."

It lasted two months. It lasted that long, Tahan recalled, in part because he didn't learn for a couple weeks exactly what they were expecting of him, then the team went on a training trip to Malaysia and its state of Sabah on Borneo.

The team itself was made up of native Taiwanese, players from Japan and some from the United States. He recalled the translation being not much of a translation.

The Japanese manager's 10 minute speech turned into a five minute speech for those from Taiwan. The English "translation," Tahan recalled, often boiled the lengthy instructions down only a few words: Try hard and don't get hurt.

"The first time we took infield I was standing in front of home plate and I didn't know what position to go to," Tahan said.

Tahan recalled asking the trainer/translator what position he was supposed to go to. He recalled the trainer looking at him like he was crazy. Tahan was the shortstop.

Tahan had played shortstop years earlier in high school, but he'd had significant problems fielding grounders. That made him generally an outfielder, with some experience at first base and catcher. He wasn't a shortstop.
About a week and a half after learning which position he was at, the team was off to Malaysia. They were the only team there. He thinks they just bulldozed a patch of rainforest to make the field.

"We were so far away that it just didn't make sense for them to release me until we got back to Taipei," Tahan said. Upon their return, "I was sent home for impersonating a shortstop."

Tahan recalled returning stateside with no idea what he was going to do. His off-season job had been tending bar at the Sheraton near the San Diego airport. He returned and the hotel was closed for renovations. He spent a few weeks at a different job making calls.

Stein was managing a team in the new independent Texas-Louisiana League and he invited Tahan to a tryout in Orange County.

Tahan excepted, but he also didn't show up on time. On his way, he and some friends started at a ranch party thrown by someone they knew. After making a "very full" day and evening of it, Tahan showed up to the tryout the next day after it had already began.

"I probably looked very much like I had been out all night," Tahan said, "because I had been."

Still, Tahan showed enough to get picked for the Amarillo Dillas, managed by Ross Grimsley.

Tahan took the field for the Dillas as one of the four veteran players allowed by the league. That meant the veterans had to play well to be worth their spot, he recalled. Tahan started poorly.
Tahan recalled hitting the ball well, but at people. Nothing was falling. He soon started hearing he was on the trading block. Tahan soon quieted that talk by rattling off a 27-game hitting streak.

"I went from being almost out the door and out of town to being pretty much the last guy they were going to get rid of at the end of the season," Tahan said.

The streak finally ended, he recalled, the day the local paper did a feature on him. He ended the season with a .293 average and 52 RBI.

He also ended with thoughts again of moving on. His friend worked at a securities firm and invited Tahan to join him. He became a stock broker and investment adviser.

Then he got another call, this one from the Cardinals. They asked him if he'd be interested in playing that spring as the player's strike ground on. Tahan recalled thinking "why not?" his only real client at the investment firm was his dad.

"The experience itself was fantastic," Tahan said. "The coaches were great. They treated us like we were the guys they expected in camp all along."

He recalled getting to spend time in the bullpen and the dugout with Cardinals coach and Hall of Famer Bob Gibson.

After the strike settled, Tahan and his teammates got their roster bonus. He was also invited to stay on with another player to help out as the regular players returned.

He recalled no one being really happy that the two were there, but he didn't get any direct animosity. He recalled hearing that the other player did get some, one of the regular players getting in his face, Tahan heard.

Tahan got to stick around even longer, through extended spring training, playing sparingly, but getting paid well to do it. He even got time in at the beach.

Once that wrapped up, Than returned to Amarillo and independent ball. He also had the best season of his career. (Go to Part 4)