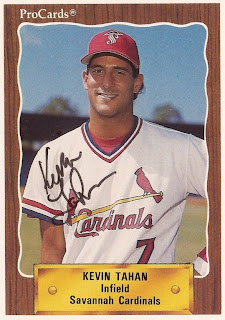 The adjustments didn't work and Kevin Tahan was worried.

This was summer 1990, his second professional season and changes his manager made to his swing, he recalled recently, had done the exact opposite of what was hoped - he'd spun himself into a viscous three-month-long slump.

"I could very much feel the whole thing slipping away," Tahan recalled recently to The Greatest 21 Days. "I could see myself getting released if something didn't happen, if things didn't get fixed."

The first baseman-outfielder Tahan responded by trying to make himself useful in other ways, including serving as the team's bullpen catcher.

His release didn't come. He started to turn things around.

"By the end of the season I was starting to get more at bats," Tahan recalled, "started to swing again."

He brought his average back up to .222 and even hit what Tahan recalled should have been a playoff home run that was called back to a ground rule double.

Tahan went on from there to a professional career that lasted 10 seasons, one where Tahan saw time in Colombia and Taiwan. He never made the majors, but he saw time at AA and in five independent league seasons.
Tahan spoke to The Greatest 21 Days by phone recently from his San Diego-area home. He covered his involvement in the game that started while he grew up in Southern California to turning pro at the age of 22 as a 43rd-round draft pick and seeing his last pitch nearly 10 years later.

His pro career started with the Cardinals in 1989 in the rookie Arizona League. He hit .294 over 50 games playing as the team's first baseman. He recalled never being particularly good at fielding ground balls, but he still did well enough to get an invitation to instructional league that fall.

Assigned to single-A Savannah for 1990, Tahan had his troubles at the plate. But he also got that opportunity to get into catching.

He'd always wanted to be a catcher since he was younger, since he got his father to buy him a set of catching gear, but the opportunity hadn't presented itself. He was always more useful elsewhere or the opportunities that did present themselves weren't good ones.

The Savannah opportunity came after infield practice one day as his manager happened to be walking out of the dugout.

"As we came off the field he was leaning against a post and he said, "Well, how'd you like to be a catcher?" Tahan recalled.

Tahan didn't get into a game at catcher that year, but he served as a catcher sporadically each year after that.

Tahan arrived at single-A Springfield for 1991 and he started strong. In fact, that May, he recalled playing well enough to be named the organization's Player of the Month. He also earned a promotion to high-A St. Petersburg.
With that promotion, though, came a grueling Odyssey in getting to his mid-season destination, which he recalled likely contributed to a poor start.

The call-up to St. Petersburg came after the Springfield team had left for a long road trip at Waterloo. He played in that night's game, got a couple hits and was officially told afterward that he was going up.

He flew back to Springfield to get his stuff for the drive to Florida. Tahan didn't have the key to his apartment. Hours later he was on the road.

"I drove straight through and arrived in St. Petersburg just in time for batting practice," Tahan recalled.

By game time that night, Tahan estimated he hadn't slept in 30 hours. He struck out three times and dribbled one back to the mound. "So that was pretty much a disaster," he said.

Within a day or two, he strained both calves running to first base. He said it didn't even occur to him to ask out of the lineup.

"Not only was I struggling at the plate," Tahan recalled, "but it looked like I wasn't hustling."

Just over two weeks after he'd arrived, he was back in Springfield.

"That was pretty much the end of my real opportunity to make it with them," Tahan recalled.
He worked at Springfield to reclaim his groove, but he wasn't successful. He played 1992 back at Springfield, hitting .263 over 95 games.

At Springfield in 1992, he seemed to be relegated for part of the season to a pinch-hitting role and to serving as the third catcher. He did rattle off seven or eight consecutive pinch hits at one point. He then got time at first later in the season after the regular first baseman got hurt.

"I really didn't do enough to get any kind of warm and fuzzy feeling," Tahan recalled.

He was invited again to instructional league, but that seemed more for him to learn how to teach. It also came with his first real extensive instruction as a catcher.

"I actually learned how to really be a catcher," Tahan said, "and it was awesome."

Sent to AA Arkansas in 1993, though, the understanding was the same. He was there to be a role model for the younger guys. He was also on the disabled list three times, he recalled, without ever being hurt.

"By the end of the season," Tahan said, "I just couldn't take it. I called - I was halfway home - and called (Cardinals farm director) Mike Jorganson and asked for my release."

Soon, Tahan was on his way to Taiwan and to independent ball. (Go to Part 3)