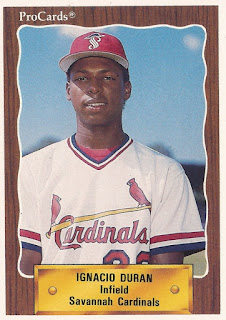 Ignacio Duran's Savannah Cardinals ran away with this April 1990 game and Duran was right in the middle of the Savannah onslaught, according to The Fayetteville Observer.

Savannah scored nine runs in the eighth inning. Duran provided for three of those, knocking a bases-loaded double and breaking a tie, The Observer wrote.

Duran was in his second professional season that year. He went on to play in five. He never made AA.

Duran's career began in 1989, signed by the Cardinals as a free agent out of his native Dominican Republic. He also went by the name Iggy Duran.

Duran played his first season in the rookie Arizona League. He hit .235 over 48 games. Then moved to single-A Savannah for 1990. The third baseman got into 127 games that year, hitting .209.

In another April 1990 game, Duran knocked in the tying run on a single. He reached on an error and scored during a July game. He went 3 for 3 with a sacrifice fly in an August contest.

He moved to the Padres system for 1993. He played most of the year in the infield at single-A Waterloo, but he also tried his hand at pitching. He got into five games that year on the mound, giving up one earned in 6.1 innings. He hit .196 at the plate.