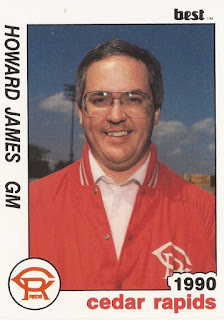 Howard James' stint as Cedar Rapids Reds general manager was about as short as it was unexpected, according to The Cedar Rapids Gazette.

The general manager he replaced was Don Buchheister, who'd been the club's GM for nearly 20 years. Just before the 1990 season started, Buchheister was out, The Gazette wrote. James, who had applied quickly, was suddenly the new guy.

"I'm in a whirlwind," James, a former sportscaster, told The Gazette after taking the job early that April. "I applied yesterday (Monday) morning, interviewed during the noon hour and was told last night I had the job."

The single-A Reds affiliate did well that year, posting an 88-46 record. James' time with the club was short. He served in the job for just that one season.

His tenure as general manager turned out to be sandwiched in between two longtime Cedar Rapids GMs, following up the long tenure of Buchheister.