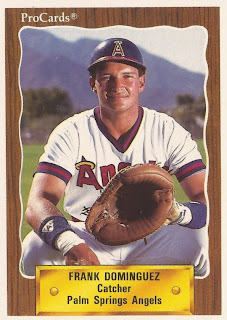 Frank Dominguez swung as hard as he could, he told The Miami Times. He was hoping to hit a home run and end this May 1984 game.

He connected and the game was over. His Southridge High School team had won.

"It was a fast ball down the pipe and my eyes lit up when I saw it coming," Dominguez told The Times. "As soon as I hit it, I knew it was gone."

Dominguez went on from Southridge to play for the University of Miami and to turn pro. His pro career lasted four seasons. He never made AAA.

Dominguez' pro career began in 1988, taken by the Angels in the 28th round of the draft. He'd been taken by the Expos four years earlier out of Southridge in the 12th round.

At Miami, Dominguez his a three-run home run as a freshman in an April 1985 game, according to The Associated Press.

"The wind really helped," Dominguez told The AP after that game. "But they'd been pitching me outside, and I thought they'd do it again. I just guessed right."

He hit a game-winning home run in a March 1988 game. He knocked in a run on a single in a May game.