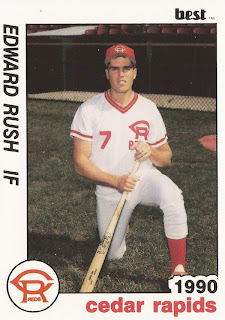 The University of South Florida came back on Florida State to take the lead in this May 1986 game. Helping them do so was a bunt single from infielder Eddie Rush, The Orlando Sentinel wrote.

It was something Rush often did, bunting for a single. He did it often enough for his head coach Eddie Cardieri to remember it years later.

"The best base-hit bunter I ever saw," Cardieri told USF broadcaster Jim Louk of Rush in 2011.

Rush took those skills from South Florida to the pros, ultimately playing five seasons in the Reds system. Rush, though, couldn't take those skills to the majors, making it to AA, but no higher.

Rush's pro career began in 1987, taken by the Reds in the 23rd round of the draft out of South Florida.

For 1990, he split time between Cedar Rapids and single-A Charleston, hitting just .237 between them.

His 1991 season ended up being his last. He played 80 games at Cedar Rapids, hitting .254. He also got his only time at AA, at Chattanooga. In his 32 games there, Rush hit .165, ending his professional career.