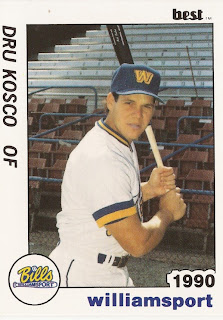 It was Kosco's third season as a pro, first in the California League.

"I feel that I'm improving everyday and learning more and more as the year goes by," Kosco told The Sun that July. "I think the reason for it is that I'm maturing as a ballplayer and hopefully that will land me a spot in the majors someday."

Kosco made AA Williamsport the next year. He even got three games at AAA Calgary. Kosco, though, never made the majors.

At Florida State in 1985, Kosco hit a two-run home run in a March game to help his team to a ninth-inning comeback.

It was in 1989 that Kosco played between three different levels. At San Bernardino, he got into 50 games and hit 12 home runs. He hit two of those home runs in one game, the day after getting hit by a pitch, according to The Sun.

"I'm just trying to shake the headache now," Kosco told The Sun. "I was seeing the ball well and really didn't have any problems."

Kosco also got 56 games with AA Williamsport. He hit just .188. He spent three games up at AAA Calgary, getting four hits in 12 at bats.