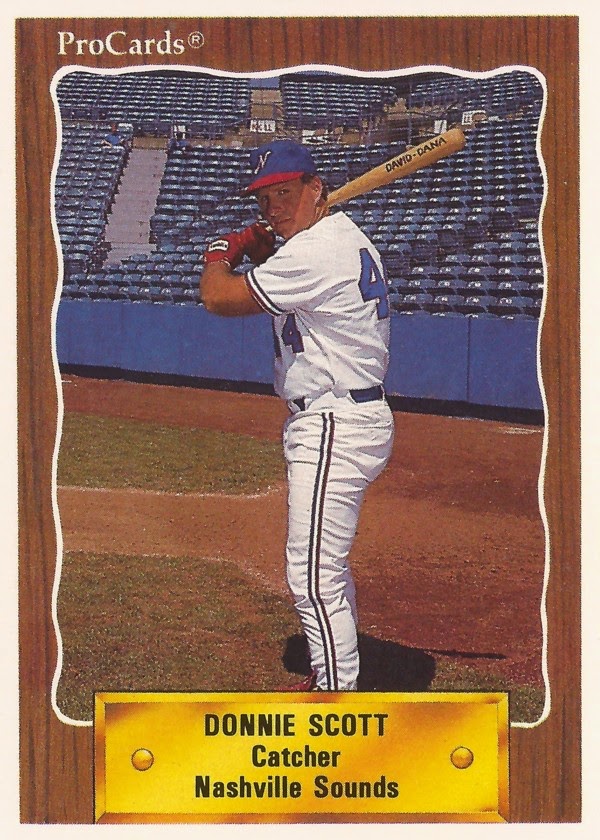 Donnie Scott had been preparing for this day since he was a kid, getting instruction from his father.

Whatever helped him, Scott ended up spending time in four major league seasons, his fourth coming six seasons after his third. He would go on to a long career as a minor league manager and coordinator.

Scott's professional career began in 1979, when the switch-hitting catcher was selected in the second round of the draft by the Rangers. He made AA Tulsa in 1981 and AAA Oklahoma City in 1983.

In September 1982, Scott's manager at Tulsa saw big things in his future, comparing him to Ranger catcher Jim Sundberg, according to The St. Petersburg Evening Independent. Scott heard the message.

"I'm about a year away," Scott told The Evening Independent. "They told me that. The door's starting to open. I can see a little crack of light.

They were right, Scott was a year away. He made Texas the next September, for two games. He returned for 81 more in 1984, including that two-home run game in April. His fete in that game was all the more impressive in that he hit just one more the rest of the year.

At the end of the year, Scott had a hand in a perfect game, on the losing end. Scott's Rangers lost to Mike Witt and the Angels 1-0, as Witt threw a perfect game. The winning run came in on a Scott passed ball.

Scott came back for another 80 games in 1985, but with Seattle. He was traded there for Orlando Mercado. Then came six seasons in the minors.

Scott split time between AA El Paso and AAA Denver, playing 1989 completely at Denver. But he didn't get called back up. For 1990, Scott signed with the Reds, spending the season at AAA Nashville.

In 1991, his final professional season, Scott got 10 more games in the majors, with Cincinnati. In 19 at bats, Scott got three hits.

It was also with the Reds that Scott started his post-playing career, managing at rookie-league Billings. He managed there for five seasons. He stayed with the Reds system each year through 2008 as a manager or a coordinator. In 2001, he signed on with single-A Dayton, managing there for three seasons, then returning in 2007 and 2008.

His time with the Reds system, however, ended in September 2008, when the Reds did not bring him back. That came after the infamous July brawl between Dayton and Peoria, where a Peoria pitcher hurled a ball into the stands, hitting a fan.

"I don't know if that had anything to do with it," Scott told The Hamilton Journal News after he was informed he wouldn't return. "I think they just wanted to make a change."

Scott has since returned to managing, serving as manager for the summer collegiate league Madison Mallards for 2015.