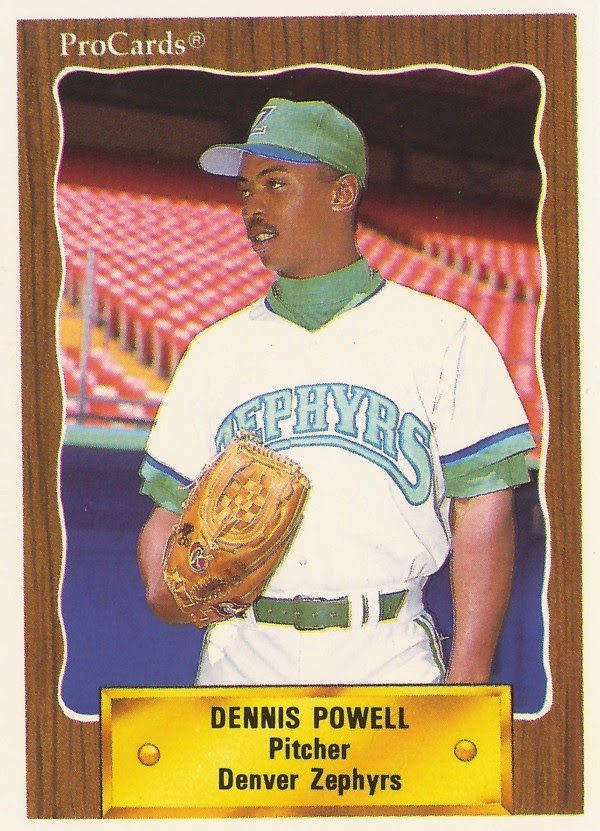 All Reds manager Pete Rose could do after Dennis Powell's August 1986 performance was compliment the opposing pitcher.

Powell went 7.2 innings that night, giving up three hits in his first start in four months.

"It just goes to show when you've got a big-league pitcher out there, you've got to score runs," Rose told The Associated Press after the game. "We didn't play well today."

Powell's professional career began in 1983, signed by the Dodgers as a free agent 19-year-old. He played that year in the rookie Gulf Coast League. He hit AA San Antonio in 1984 then AAA Albuquerque in 1985.

He also made Los Angeles in 1985, getting into 16 games for the Dodgers that year, starting two. In those 16 games, Powell posted an ERA of 5.22. He made his first major league start July 28, giving up four runs in four innings.

Powell told The Los Angeles Times after that start that he believed his problem was that he kept falling behind in the count.

"But I remember what (minor league pitching instructor) Larry Sherry told me," Powell told The Times. "You've got to keep your head up. I'm in Los Angeles now. I wasn't nervous. I was looking forward to today and I'm looking forward to my next opportunity."

For 1987, the Dodgers traded Powell to the Mariners. He stayed with the Mariners for three seasons, getting into 16 games his first year and 12 the next, mostly as reliever. In his third season, Powell got into 43, posting a 5.00 ERA.

Between the three seasons, Powell started six games, including a spot-start in May 1989 where he went four innings and gave up five runs. Powell told UPI after that May 1989 game he wasn't prepared for the start, he'd been told he was starting 90 minutes before taking the mound.

"You come to the park thinking differently," Powell told UPI after that 1989 start. "I didn't know how long I would last and I just wanted to do the best I could to keep us in the game."

Powell started 1990 with the Mariners, but was released by May. He signed that May 7 with the Brewers, sent to AAA Denver. He returned to the majors by June, getting into nine games for Milwaukee, starting seven.

He returned to the Mariners for 1991, spending the year at AAA. But he had two big league seasons yet to come, the two seasons where he saw his most work.

In 1992, Powell returned to Seattle, coming into 49 games as a reliever. He picked up four wins to two losses, with a 4.58 ERA. He picked up one of those 1992 wins in a late May relief appearance.

"I feel real important to the team," Powell told The AP after that win. "They're putting me in game situations. I'm happy to do what I'm doing, just helping the team."

Powell got into another 33 games in 1993, starting two of them. His ERA that year at 4.15. It was his final year in the majors. Powell pitched in 1994 at AAA Nashville, with the White Sox, then moved to Japan for a year with the Kintetsu Buffaloes in Japan. He returned for five more outings in 1996 at AAA with the Orioles, ending his career.