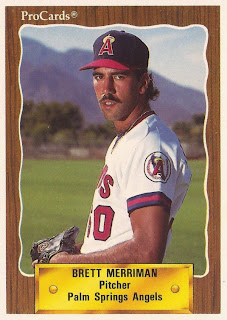 Brett Merriman came back from one near no-hitter in high school to finish the job in his next outing, his hometown Nevada Daily Mail wrote.

His coach Matt Spencer could find little difference between the two performances, he told The Daily Mail.

"It was equal as far as outings go," Merriman told The Daily Mail afterward. "He had much better control. His fast ball is live and sawing the bat off their hands, so to speak."

Merriman went on to take his control on to an eight-season pro career. In two of those seasons, Merriman used that control in the majors.

Merriman's pro career began in 1988, taken by the Indians in the ninth round of the draft out of college. He played at Grand Canyon University and Mesa Community College.

Merriman started at rookie Burlington. He got eight starts and had a 2.58 ERA. He moved to short-season Watertown and single-A Miami for 1989.

Released during spring training 1990, Merriman signed on with the Angels and played that year between high-A Palm Springs and AA Midland.

Merriman arrived with the Twins for 1993, taken that off-season by the Rockies in the expansion draft and then traded. He debuted in Minnesota that April.

He got into six games for the Twins that month. He then returned at the end of August and picked up his first major league win.

The win came from three innings of scoreless relief - the 20th, 21st and 22nd innings of a marathon game against his old team, the Indians.

Merriman gave up a few runs in his other outings that year, though. He went on to get 19 total appearances for the Twins that year, recording a 9.67 ERA.

He went on to play in two more minor league seasons, at AAA Salt Lake in 1994 and AAA Las Vegas for the Padres in 1995, ending his career.

Years later, Merriman watched as his son Alec followed him into baseball at Mesa Community College.