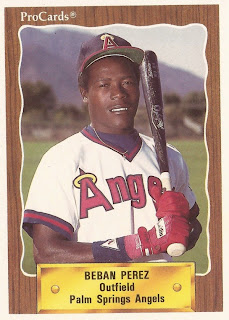 Abilene had a big win in June 1995 game and Beban Perez helped them get there.

The Abilene Prairie Dogs ended with a 12-6 win over rival Pueblo. Perez' contributions consisted of three hits, a run scored and two RBI, according to The Pueblo Chieftain.

That season was Perez' eighth as a pro. It was also his last. Perez made it as high as AA in a career where he spent time as both a position player and as a pitcher. He never made the majors.

Perez' career began in 1987, signed by the Yankees as a free agent out of his native Dominican Republic.

He played 1992 on the mound, splitting time between Quad City and short-season Boise. He got into 25 games in all, starting five of them. He picked up three wins and one save. His ERA came in at 5.76.

Perez returned to Palm Spring for 1993. He got into 33 outings there, with a 5.11 ERA. He also got three outings at AA Midland. He gave up eight earned in 3.2 innings there. It was his final year in affiliated ball.