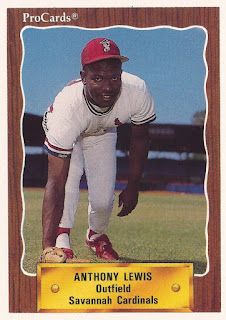 Anthony Lewis told The Hartford Courant in April 1996 he believed his experience was one of the reasons why he was with the Twins' AA club that year.

Lewis was in his eighth season as a pro and he'd seen time at all levels of the minors, including a brief stint at AAA.

"I think that's part of why I'm here, is to guide some of these guys and help them out a little bit,'' Lewis told The Courant.

While he may have helped them out, and he hit 24 home runs himself, Lewis could never help himself to the majors. He went on to play in 13 total professional seasons, but he never played in the bigs.

Lewis' career began in 1989, taken by the Cardinals in the eighth round of the draft out of Rancho High School in Las Vegas.

He scored the go-ahead run in an April 1992 game with St. Petersburg. In July, he won team Batter of the Week honors.

Lewis hit another 24 home runs after moving to the Twins system and AA Hardware City for 1996. He had a .253 average that year. He hit a walk-off single in a May game. He then hit one of his home runs in a June contest.

Lewis had five more seasons after that one. He played in the affiliated minors for part of two of them, at AA New Haven with the Rockies in 1997 and briefly at AA Wichita with the Royals in 1998.