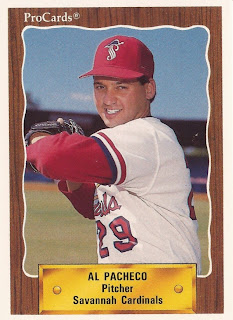 Al Pacheco's Opa-Locka Monsignor Pace High School was one win away from the Florida state championship game and, while Pacheco started off slow on the mound that hot day, he got them there, The Orlando Sentinel wrote.

Pacheco didn't pick up a strike out until the fourth inning. But that strike out signaled Opa-Locka's birth in the championship, Opa-Locka coach John Messina told The Sentinel.

"Once the fourth inning came and Al struck out two batters, I knew we had them,'' Messina told The Sentinel.

Pacheco went on to play college ball at the University of Miami and Florida International University and pro ball in the Cardinals organization.

But, after being taken by St. Louis in the 27th round of the draft, Pacheco's professional career turned out to be a brief one. He played in just two seasons and never got above high-A.

Pacheco's career, though, as many do, had roots in high school. By early May 1985, Pacheco was 9-4. He was already University of Miami bound.

His work was also well known to his opponents. That April 30, Pacheco went up against rival pitcher Joe Blasucci. Neither gave up an earned run, but Pacheco's Pace got the win.

"I knew (Pacheco) would throw good," Blasucci told The South Florida Sun-Sentinel, "so I just went out there to throw strikes."

That next April, Pacheco, serving as a reliever, recorded his first collegiate victory. He worked 1.1 innings, giving up one hit and no runs, The Miami News wrote. By 1988, the junior Pacheco was working on his strikeouts, setting down five of the seven batters he faced in an early March game, The Sun-Sentinel wrote.

For his senior year, though, Pacheco transferred to Florida International University. It was from there that the Cardinals selected Pacheco.

Pacheco played his first professional season at rookie league Johnson City. Turned starter, he went 3-36, with a 3.57 ERA in 13 starts.

In his second, and what would turn out to be his final professional season, Pacheco got 22 outings, 18 of them starts, at single-A Savannah. He went 8-6, with a 3.90 ERA.

Back in 1985, Pacheco's Pace High School went on to win the state championship. Helping get them there was Pacheco's pitching in that hot game May 9.