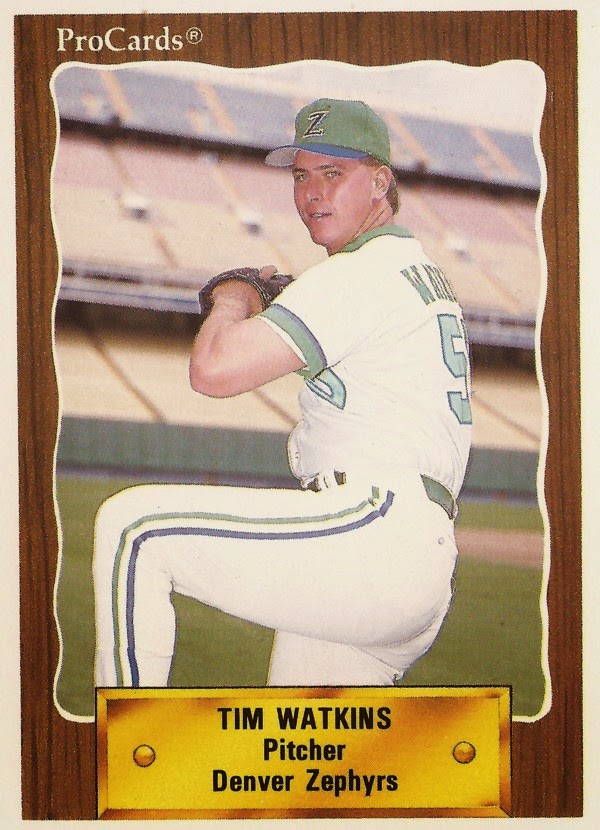 Down to Watkins or teammate Odell Jones, it was Jones who got the final roster spot, Watkins sent to AAA Denver.

"It's almost an added relief," Watkins told The Milwaukee Journal, coming off a poor late-spring outing. "Coming here today, I put a lot of pressure on myself. It caused me not to pitch as well as I had.

"But I feel good," Watkins added to The Journal, "A lot of people never expected me to get this far."

Watkins, though, never got further. He spent that season at Denver, without getting called up to Milwaukee. He also spent time at AAA over the next two seasons, but he never made the majors.

Watkins' career began in 1985, taken by the Reds in the eighth round of the draft out of Mississippi Valley State University.

For 1987, Watkins arrived in the Brewers system, playing at single-A Stockton and single-A Beloit. Between them, Watkins went 12-6 in 11 starts and 32 relief appearances.

Then came that spring in 1988. By March 11, Watkins was already gaining notice, according to The Milwaukee Sentinel. Still, he was seen as a long shot.

"He'd have to pitch head and shoulders above the rest of the guys," Brewers manager Tom Trebelhorn told The Sentinel. "If he's about the same as the others, it wouldn't be fair to the kid to keep him. He may not see it that way, though."

Down at Denver, Watkins got into 47 games in relief, posting a 4.10 ERA. Watkins came into 1989, though, with a sore shoulder. Back on the mound, Watkins got only 7 outings at Denver, playing the remainder of the year at AA El Paso.

He played 1990 again between Denver and El Paso. By 1991, what would be Watkins' final season, Watkins was with the Cubs at AA Charlotte. At Charlotte, Watkins picked up 13 saves, with a 3.11 ERA. His fourth save came in early May.

In mid-May Watkins did find himself in Chicago, but he was there for the Crosstown Classic, the exhibition game with the White Sox. He never got to play in a regular major league game, his career ending with 1991.