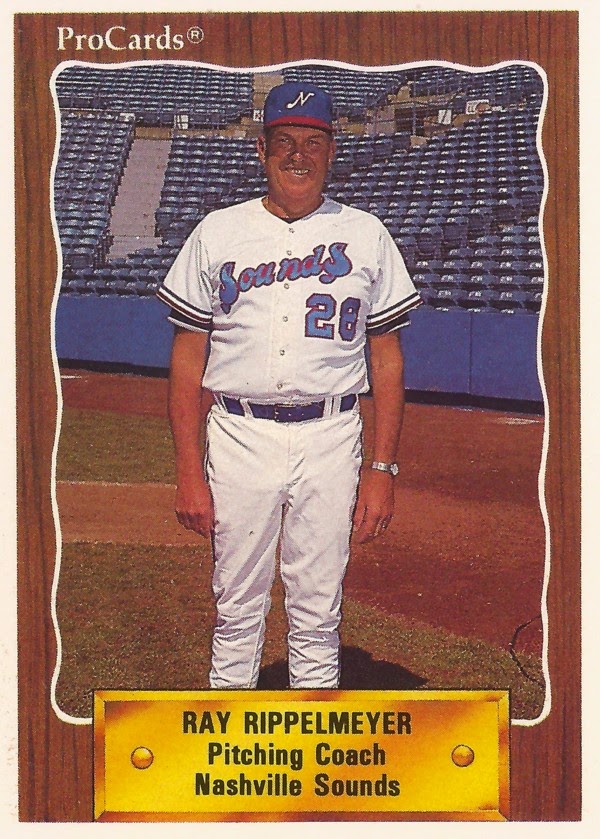 Steve Carlton got off to a slow start in 1975, but his pitching coach Ray Rippelmeyer wasn't concerned.

The 30-year-old future Hall of Famer had a record of 1-4 by early May, with a 6.27 ERA. Rippelmeyer told The Associated Press he just thought it was "one of those things."

"He was getting the ball up, but I don't think it was anything that had to do with his motion," Rippelmeyer told The AP. "Mechanically, I think he's sound and we're not discouraged."

Rippelmeyer served as the Pillies pitching coach through much of the 1970s, after a decade-long career as a player. That playing career saw Rippelmeyer pitch in all of 18 big league contests, one of them starts, and all in 1962 for the Senators.

But it was as a coach that Rippelmeyer had the most impact, serving nine seasons watching over the Phillies pitching staff, later returning to the minors, helping other pitchers make it to the majors.

It was shortly after his playing career ended that Rippelmeyer caught on with the Phillies, as a pitching coach in the minors. He worked in that role in 1968, working with pitchers to avoid breaking a new rule to curb spit balls, The Spartanburg Herald wrote.

By 1970, Rippelmeyer was back in the majors, as the Phillies' big-league pitching coach. His tenure would start with the Phillies at the bottom of the standings. It would end in 1978, after three-straight division championships.

In 1973, Rippelmeyer worked with young Dick Ruthven, signed by the Phillies the previous year. The curve ball that the scouts saw, though, wasn't working for Ruthven in the majors, The AP wrote.

Rippelmeyer's solution was to try and get Ruthven to throw a slider, believing that would help his curve problems, The AP wrote. Ruthven was in his first of 12 big league seasons.

Rippelmeyer made a similar move with Carlton, after Carlton came over from the Cardinals in 1972, he recalled years later. Carlton, though, just needed a coach to encourage the pitch, Rippelmeyer told The St. Louis Suburban Journals in 2009.

"As soon as I saw him throw a slider (in spring training), I told him, 'you're going to throw it now,'" Rippelmeyer recalled to The Journals.

The Phillies won 101 games that year, a team record. The team ERA was 3.08. Staying with the Phillies through 1978, Rippelmeyer retired to spend time back home on his farm in Valmeyer, Ill., The Philadelphia Daily News wrote.

By 1988, though, he was back with the club, as a roving pitching coach. He told The Daily News he didn't think the game had changed much in his time away.

Rippelmeyer's stay with the Phillies that time only lasted one season. By 1989, he was pitching coach with the Reds, at AAA Nashville, staying there through 1990. He later joined the Mets organization at Capitol City.

In 1997, he was pitching coach for AAA Norfolk, telling The Newport News Daily Press that pitcher Juan Acevedo needed to work on his mental approach.

"Right now, that's the only thing keeping him from pitching in the majors," Rippelmeyer told The Daily Press of Acevedo. "Hey, to pitch in the major leagues you have to go out and do it every day. Some days, they aren't going to catch the ball for you. The only thing you can do is go out and throw the ball."