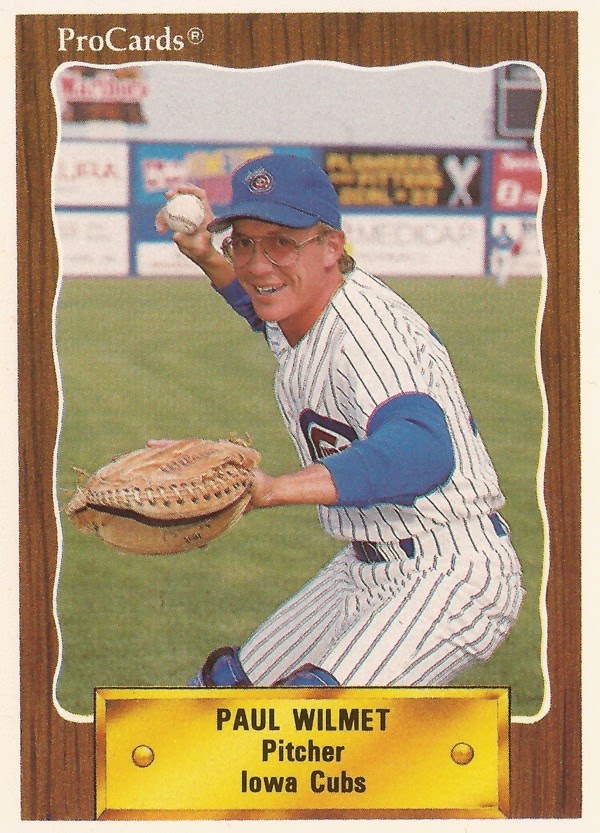 The Pirates were more than satisfied with their find of Paul Wilmet in 1987. Purchased from the Cardinals in May, Wilmet went on to impress at single-A Salem, posting an ERA of 0.50 in 22 relief appearances. He continued that success in the Florida instructional league.

That off season, Wilmet was being called a prospect and Pittsburgh pitching coach Ray Miller wanted to see Wilmet and his fork ball close up that spring, according to The Pittsburgh Post-Gazette. He compared the pitch to another Pirate player.

"Wilmet has a fork ball that breaks more than Jeff Robinson's," Miller told The Post-Gazette in November 1987. "It might not be as hard, but it's a tremendous late-breaking pitch. He overmatched em' (in Florida.)"

Wilmet didn't make Pittsburgh in 1988, but he did make the majors the next year, after signing with Texas. He pitched in three games for the Rangers that year, what would be the extent of his big league career.

After playing baseball, Wilmet's playing days have continued, only now he's playing a guitar in Nashville.

Wilmet's baseball career began in 1981, signed by the Mets out of Des Moines Area Community College. Wilmet split that year between short-season Little Falls and single-A Lynchburg, posting an ERA of 1.85 at Little Falls, but 4.91 at Lynchburg.

Wilmet split 1988 between Harrisburg and AAA Buffalo, posting sub-2 ERAs at both stops. He had eight saves with Harrisburg by late June. Wilmet signed with the Rangers for 1989, starting at AAA Oklahoma City. He got his call up in late July.

Wilmet debuted for the Rangers July 25 and he debuted well. He got two outs in the Rangers loss, striking out one. He also put his mark in the Rangers record books, albeit with a small contribution to a larger cause. Wilmet's one strike out added to 17 others Ranger pitchers punched out on the night, a team record for strike outs in one night. Fourteen of those came from starter Nolan Ryan.

Wilmet moved on to the Cubs system in 1990, pitching in 25 games at AAA Iowa with an ERA of 4.09. It was his final year playing baseball.

In July 1990, The Pittsburgh Press noted that Wilmet and other members of the Buffalo Bisons had previously sung the National Anthem. The Press also noted their renditions suggested a career in music, not baseball.

Wilmet has gone on to a career in music, according to his MySpace page, singing country, pop and R&B in Nashville.