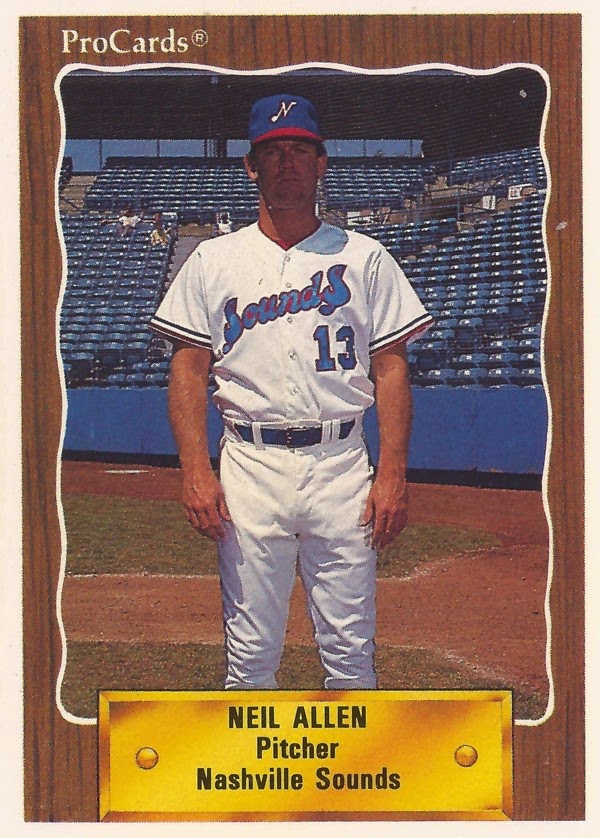 Neil Allen finally found success in 1986, something he hadn't seen in some time, The Associated Press wrote.

By that July, the former New York Mets closer was 6-1 and hurling as a starter.

"I made my name in the bullpen, but my whole career was going downhill," Allen told The AP. "The way things were going, if the White Sox hadn't come along, I might have been on Long Island right now cutting grass."

Allen stayed on a major league mound, and away from cutting grass, into 1989. But he still isn't cutting grass. Allen has gone on to a post-playing coaching career. For 2012, he's serving as pitching coach for AAA Durham.

Allen's career began back in 1976, taken by the Mets in the 11th round of the draft out of Bishop Ward High School in Kansas City.

Allen made AAA Tidewater in his third season and Flushing in his fourth. With the Mets in 1979, Allen got into 50 total games, starting five of them. He went 6-10, with eight saves.

Allen came back in 1980 to pick up 22 total saves for the Mets in 59 outings, both would be career highs. In July, he was named National League Player of the Week. After a brief slump that May, Allen came back and pitched three shutout innings, for his sixth save.

By 1984, he was relieving again. And, after Bruce Sutter's departure for 1985, the Cardinals looked to him to close again, Sports Illustrated wrote. And it didn't go well. He only saved two games and, by July, was a Yankee.

After playing out that season in The Bronx, Allen moved to the White Sox for his chance at starting again. He went 7-2 overall in 1986, with a 3.82 ERA. In 1987, though, he started 0-7 and was back with the Yankees by September.

In late may 1988, Allen put his starting skills to use in a spot start, forced in due to injury, The AP wrote. Allen went the full nine innings, shutting out the Athletics on three hits.

"They told me I was going to be the long relief man," Allen told The AP after that game. "They didn't tell me I'd have to start the game, too."

Allen finished out his major league career in 1989 with three final games with the Indians. His playing career ended the next year at AAA Nashville, with the Reds.

By 1998, Allen was a coach in the minors, with the Blue Jays at St. Catharines. By 2000, he was in the Yankees system as a coach at single-A Greensboro. In 2005, he moved all the way up to The Bronx, for a season as Yankees' bullpen coach.

Allen has since moved to the Rays system and is now in his second year as pitching coach at AAA Durham.