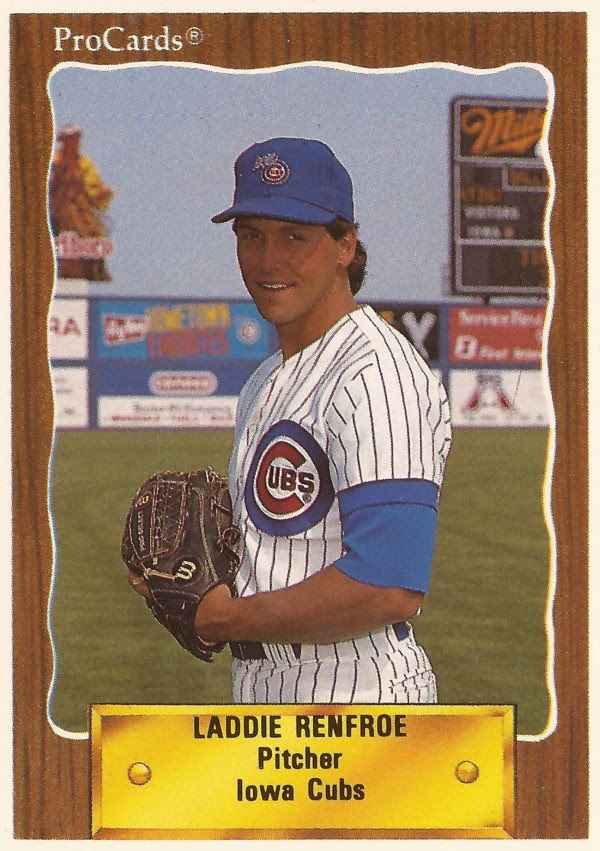 Laddie Renfroe had some important advice for his son David in June 2010, according to The Nashua Telegraph. Professional baseball and college baseball are not the same.

"I told him, 'You’re going to be playing every single day,'" Laddie Renfroe told The Telegraph on the occasion of his son, the Red Sox' 2009 third-round pick, starting play at single-A Lowell. “And you’re going to have to battle through slumps every once in awhile, so just work harder.”

The father knows, he played professionally for nine seasons, pitching in the majors for a total of four games and 4.2 innings.

Laddie Renfroe started his own career taken by the Cubs in the 24th round of the 1984 draft out of the University of Mississippi. He had been a walk-on at OleMiss and, by the time his college career ended, he owned the school's total wins mark, according to The Telegraph.

But, whether it was enough to get him drafted, Renfroe wasn't sure.

"I waited and waited," Renfroe told The Telegraph in 1985. "I came to the conclusion that I wasn't going to be drafted. Then (Cubs scout Earl) Winn called with the good news."

He returned to AA in 1989, at Charlotte. Still a reliever, Renfroe claimed 19 wins for the club and a 3.14 ERA. At one point, he retired 16 consecutive batters, according to The Rock Hill Herald.

"I'm throwing better strikes," Renfroe told The Herald that May. "But throwing every night helps me. When I'm tired the ball sinks more."

In four outings for the Cubs, Renfroe pitched in 4.2 innings and gave up seven earned runs. He faced 14 batters in his third appearance, giving up two of those runs and taking the loss.

Sent back down shortly afterward, Renfroe played one more year at AAA Iowa and his career ended. Now his son David Renfroe is playing in the minors himself, in the Red Sox system.