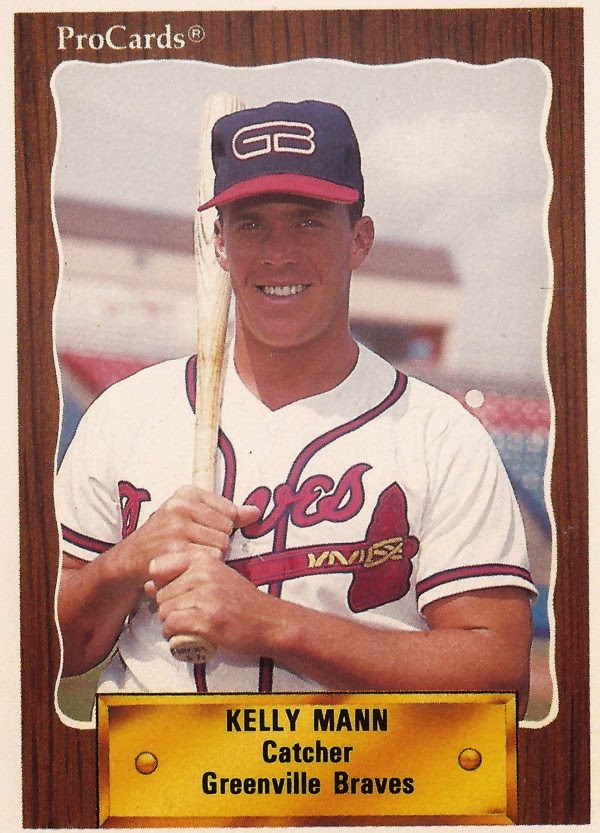 Kelly Mann didn't hit well at AAA Richmond, but he was in Atlanta nonetheless in September 1990, according to The Los Angeles Times.

Mann knew it wasn't his bat that got him there.

"I went through a really bad slump," Mann explained to The Times of his hitting at Richmond. "But I showed everyone what I could do defensively, and that's why I'm here in the majors."

Mann got into 11 games for the Braves that month, after getting into seven the previous year. His defense, though, wasn't enough to get him back. Those 18 games turned out to be the extent of his major league career.

Mann's career began in 1985, taken by the Cubs in the 20th round of the draft out of Santa Monica High School in California.

Mann started at rookie Wytheville. He hit .200 in 26 at bats. He played 1986 between short-season Geneva and single-A Peoria. He made AA Pittsfield briefly in 1988 and then AA Charlotte full-time in 1989.

That Sept. 1, Mann was sent to the Braves with another player to complete an earlier deal for Paul Assenmacher. He also made Atlanta.

Mann got into seven games for the Braves that September. He picked up five hits in 24 at bats.

He returned to the minors for much of 1990, playing between AA Greenville and AAA Richmond. He hit .251 between them, but .202 in 63 games at Richmond.

That July, one of Mann's old managers from the Cubs system Jim Essian explained to The Times what was holding Mann back.

"I think Kelly is an excellent catcher, a big-league catcher," Essian told The Times. "Defensively, he's capable of playing in the major leagues right now. It's just a matter of how well he hits."

Mann worked the next spring to get back to Atlanta by again showing off his defense. He threw out two runners in one game, one of Delino DeShields, according to The South Florida Sun-Sentinel.

"It's nothing new for me," Mann told The Sun-Sentinel. "I threw him out a few times in the Southern League. Those are the ones that separate catchers from being average and being really good."