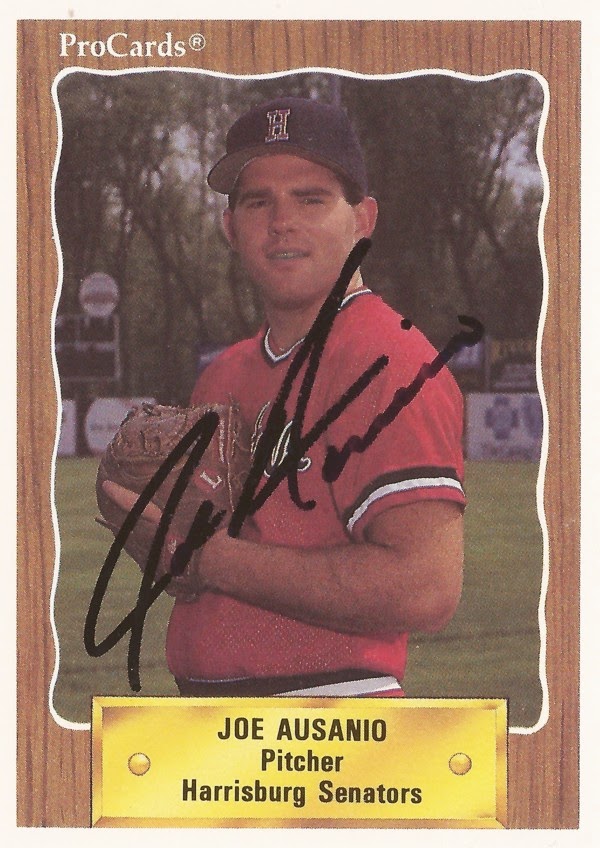 It was the All-Star break in 1994 and he had just gotten his first call to the majors - in his seventh professional season.

The team was in New York for workouts at Yankee Stadium before heading heading out to Seattle for its first post-break road trip.

"I just remember walking down that tunnel and when I got into the dugout, just looking up, just looking into the upper deck," Ausanio recalled to The Greatest 21 Days recently. "I'm like, 'Wow, so this is what it's like to see this view from here.'"

His first taste of a major league game came on the Seattle trip. His first taste of game action in the Bronx didn't come until later that month, called into pitch the eighth inning of a game against the Boston Red Sox.

"I just remember running in and saying 'holy sh--, holy sh--,' I just kept saying that to myself, 'this is real,'" Ausanio said.

Ausanio went on to play in the majors in parts of two seasons, both with the Yankees. He got into 41 games in all, picking up four wins and a save.

He's gone on to stay return to baseball in the front office of the Hudson Valley Renegades near his hometown of Kingston, NY. He's also gone into coaching, heading up the Marist College softball team.
Ausanio spoke to The Greatest 21 Days before an April 2015 Marist game against rival Iona.

Ausanio's path to the majors began in 1988, taken by the Pirates in the 11th round of the draft. He played his first year at short-season Watertown, moving to single-A Salem for 1989. He played well both places.

In his first three seasons, his ERA never topped 2.12. That mark came at single-A Salem, the year he won organizational pitcher of the year honors.

After his 1990 season at AA Harrisburg, Ausanio was sent to winter ball in Venezuela and he continued pitching well there. He won both top reliever honors there and top overall pitcher honors.

He then got his first invite to major league camp that next spring. After a good spring, and everything he'd done, Ausanio's reward was a return to AA to start 1991.

"They sent me back to AA, which was such a crushing blow to my ego," Ausanio recalled.

Ausanio responded by going out and saving two of the AA Carolina club's first three games. He received a quick call to AAA Buffalo.
His steady rise then began to stall. He got sick. He started having panic attacks and dizzy spells. On top of that, his father had passed away and son was born sick. His overall playing time was limited to 25 games.

Ausanio returned to AAA for 1992 and he returned to form. He got into 53 outings in relief and turned in a 2.90 ERA. He also saved 15 games. He didn't get called to Pittsburgh.

That off-season, the Pirates placed Ausanio on waivers and he was picked up by the Expos. He hurt his elbow the next spring and landed in extended spring.

He played the rest of the year back at AA Harrisburg, then the Expos affiliate. That September, Ausanio took the save in a big extra-inning playoff win against the AA Yankees.

Ausanio believes that's where the Yankees organization noticed him. They picked him up in that December in the minor league draft. He was assigned to start 1994 at AAA Columbus.

He really pitched well when Yankees catcher Matt Nokes was in town on a rehab assignment. He recalled closing out three games in a row and Nokes was impressed.

Ausanio recalled Nokes telling him he looked better than what the Yankees had in the Bronx.

"I said, 'well you need to go up there and tell somebody about it,'" Ausanio recalled responding to Nokes. "And about a week later, I got a call to the big leagues."

The call came on a day off for his Columbus team. Ausanio had some teammates over and Ausanio was making dinner.

After Ausanio asked Yankees farm director Mitch Lukevics to repeat the news, Ausanio was on his way to the Bronx and his major league debut at Seattle's Kingdome. (Go to Part 3)