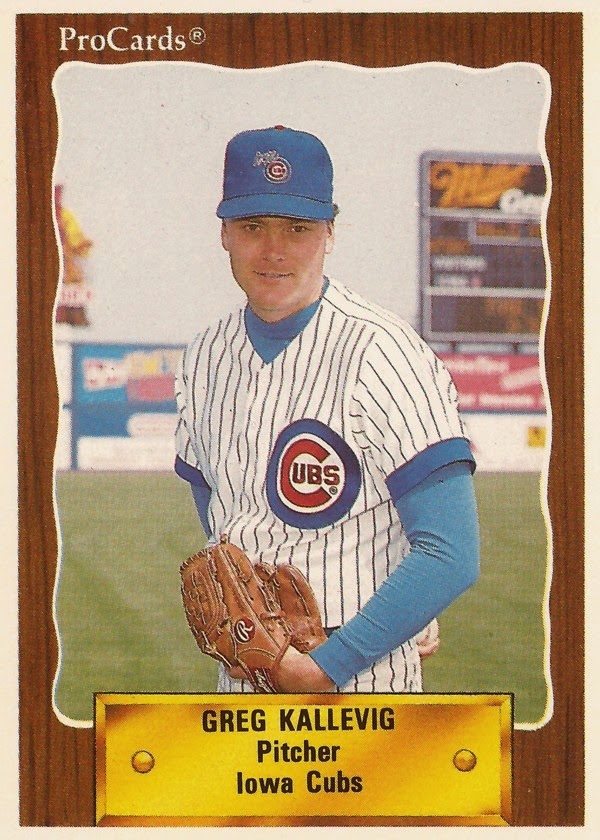 Pitching for AA Charlotte in 1989, Greg Kallevig hadn't gotten a win by mid-May, he was 0-3. This night, May 19, would be his first, according to The Rock Hill Herald.

After a scoreless initial frame, his Charlotte Knights teammates got going, giving him a quick four-run lead. Kallevig and the Knights ultimately won 10-4, the only thing keeping Kallevig from a complete game was a late tweaked pitching hand, The Herald wrote.

"When you get four quick runs like that it makes it a lot easier to pitch," Kallevig told The Herald. "You can just go right after the batters."

Kallevig went on to a record that year of 7-10 and he would make AAA Iowa the next year. But he wouldn't make the majors, his 1990 campaign being his last.

Kallevig's first professional campaign came in 1985 at rookie league Wytheville. going 6-7 with a 3.81 ERA.The Wilmar, Minn.,-native joined the Cubs organization that year, selected in the 10th round out of South Dakota State University.

Then it was to AA Charlotte in 1989. He had a rough outing in late July, giving up four runs in a loss, according to The Herald. But only one of those runs was earned. In late August, Kallevig got the complete game that eluded him when he tweaked his hand earlier in the year. It was one of three complete games he had on the year.

In that game, Aug. 28, Kallevig gave up nine hits, while walking none. He also got some early support in that game, his Knights giving him five runs before he even took the mound, The Herald wrote.

At season's end, the Cubs sent Kallevig to the Pirates, but Kallevig wouldn't be credited with an appearance in the Pittsburgh organization, his career ending after six seasons and short of the majors.