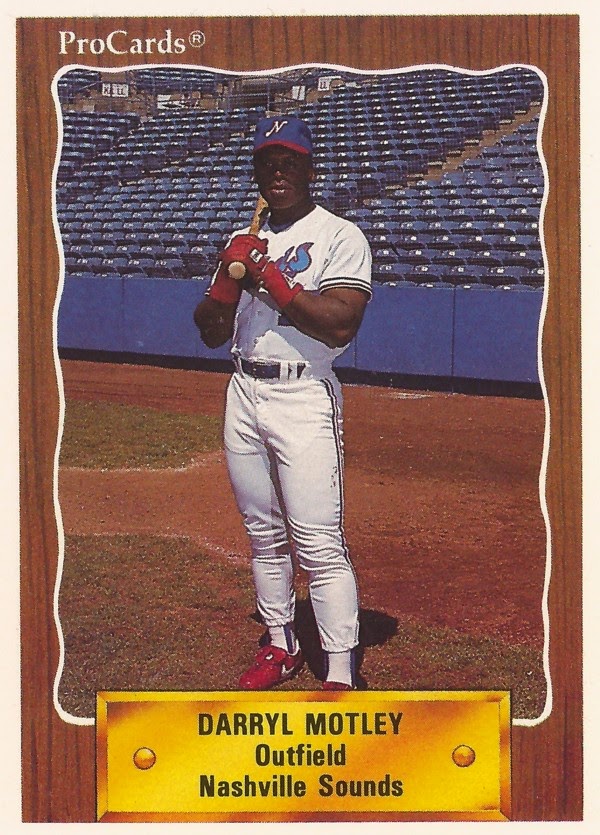 Darryl Motley was just trying to hit the ball hard May 25, 1984. He ended up driving in five runs and scoring three in a Royals win over the Red Sox at Fenway Park.

"I've had some good games in the minor leagues," Motley told The Associated Press afterward, "but this is definitely my biggest game in the majors.

Motley was on the road to racking up contenders in 1978, drafted by the Royals in the second round. He made AA Jacksonville in 1980 then AAA Omaha in 1981. A Motley home run in June helped Omaha to a win. The year he made Omaha was also the year Motley made Kansas City, playing 42 games for the Royals and hitting .232.

Motley played in 146 games for Kansas City in 1984, hitting .284. He returned for 1985, playing in another 123 games, but hitting just .222. He made the Royals post-season roster, but was used little during the league championship series, The Associated Press wrote. In the World Series against the Cardinals, Motley was just 1 for 7.

In the second inning of Game 7, Motley came to bat. He took a 3-2 pitch far down the left-field line, but foul. Upset, he hit his bat to the ground and cracked it.

With a new bat, one he'd never used before, the AP wrote, he hit the next pitch out and fair. The two-run shot put the Royals up 2-0 and put them on their way to an 11-0 rout and the World Series title.

"I've had visions and dreams about this," Motley told reporters afterward. "Everyone dreams of being the man in the seventh game of the World Series."

Motley even got to catch the final out.

Despite his World Series success, Motley only played in two more seasons. By the end of 1986, he was with the Braves. The next year, he only played in six games and his major league career was done. But his playing career wasn't.

Motley hung on in the minors through 1990, ending up that year with the Reds system at AAA Nashville, then with the Rangers at Oklahoma City by July. Motley helped the 89ers to a win that month with an 11th inning, two-out, run-scoring single.

His time in affiliated ball done, Motley spent time in Mexico and in Japan. In Japan, Motley helped his Chiba Lotte Marines to a win with a score-tying single.

Motley returned stateside to play independent ball in 1995, often serving as a player and a coach. In 2001, he was a player-manager with the independent Adirondack Lumberjacks, enduring a losing season.

But Motley is still asked about that 1985 World Series home run, now a quarter century later. Motley spoke of the home run in May to The Kansas City Kansan, recounting the first one went foul.

"That doesn’t happen very much," Motley, now a personal trainer, told The Kansan. "Usually when you hit one just foul you make an out. I still think about it. It was a great thrill."