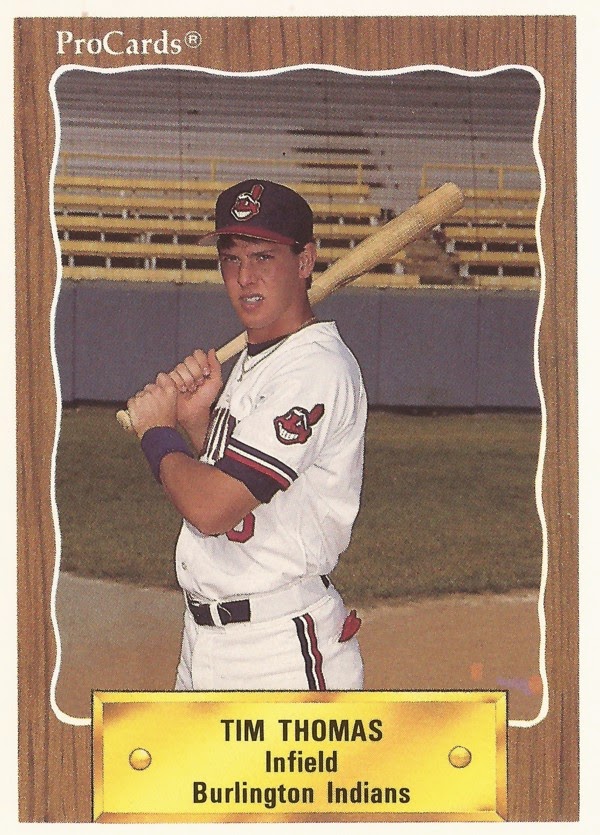 Tim Thomas' Pickerington North High School team pulled the upset in this May 2014 district game, according to ThisWeekNews.com.

Helping them do so were two big sixth inning doubles, the site wrote.

"One big hit changes everything," Thomas, the team's head coach, told ThisWeekNews. "Those hits put us over the top."

Thomas has served as a youth baseball coach for much of the past two decades, at the same time serving as a teacher in the Pickerington City Schools, according to his old high school's Hall of Fame.

Before being a teacher and a coach, Thomas was a player. He played in parts of two seasons in the Indians system. He got into 38 games total.

Thomas' brief career began in 1990, taken by the Indians in the 25th round of the draft out of Ohio University.  He transferred to Ohio after starting at the University of Illinois. He played his high school ball at Upper Arlington, outside of Columbus.

At Upper Arlington, Thomas helped his team to the 1987 state championship. He was inducted into the school's Hall of Fame in 2014.

At Ohio University, Thomas swiped 20 bases in 1990, still good for a tie for fourth all-time at the school.

Thomas played his first season between rookie Burlington and the rookie Gulf Coast League. He got into 35 games between them, hitting .220 with two home runs. He stole nine bases.

He returned for 1991 and was assigned to short-season Watertown. He only got into three games, without getting a hit. Those were his final games as a pro.

Thomas then went on to return to Columbus and he became a teacher in the suburb of Pickerington.  He coached in middle school and in high school. Since 2005, he has served as head varsity coach at Pickerington North.

In 2014, his team went on to win the district title. The team came back from a big early May loss to run to the title, according to ThisWeekNews.