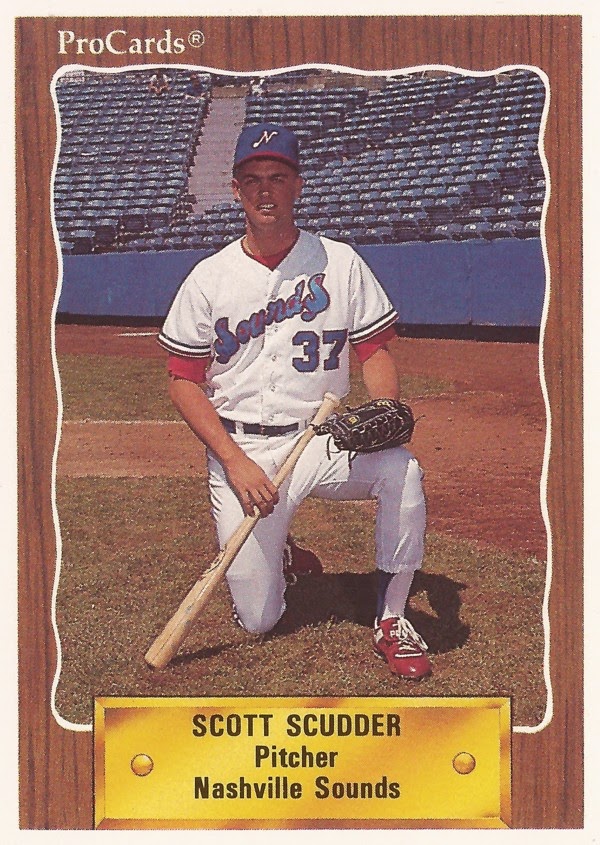 "I was disappointed when I got sent down," Scudder told The Associated Press after his return May 6, "but I expected to be back."

Scudder returned to the Reds with a start where he went into the eighth inning, giving up a single earned run.

Scudder went on to pitch in five major league seasons, playing for the Reds and the Indians, getting 96 outings, 64 starts. He also played on a World Series champion.

Scudder's career began in 1986, signed by the Reds as the 17th overall pick out of Prairieland High School in Texas.

He started at rookie Billings, moving to single-A Cedar Rapids in 1987. He made AA Chattanooga for the first time in 1988, then AAA Nashville in 1989. In 1989, Scudder also made Cincinnati.

Scudder debuted with the Reds in June. He picked up his first win June 22, in his fourth outing. He got into the eighth, giving up one earned run. Scudder, though, wasn't satisfied with the win, according to The AP.

"As a pitcher, you want a shutout," Scudder told The AP. "You don't just want a victory."

Coming back for 1990, Scudder made it back in May, going on to get 21 outings, 10 starts for the eventual world champions. He had a 5-5 record, with a 4.90 ERA. In July, Scudder was pressed into a start three days after a relief appearance. He went into the seventh, giving up two runs and picking up his second win.

"It was kind of like relief," Scudder told The AP of that emergency start. "I took it like I was relieving the game."

Scudder stayed with the team into the postseason, getting an appearance each in the NLCS and the World Series. In the World Series, Scudder pitched 1.1 innings in Game 2, striking out two without giving up a hit.

The trade to the Indians allowed Scudder to pitch as a visitor in a park he used to go to as a kid in Paris, Texas, Texas' Arlington Stadium. He pitched there and won there in May.

On the year, Scudder went 6-10, with a 5.28 ERA. He returned for two more outings in 1993, starting one game. They were the last two major league games of his career. He continued playing in the minors into 1995, but never made it back to the bigs.