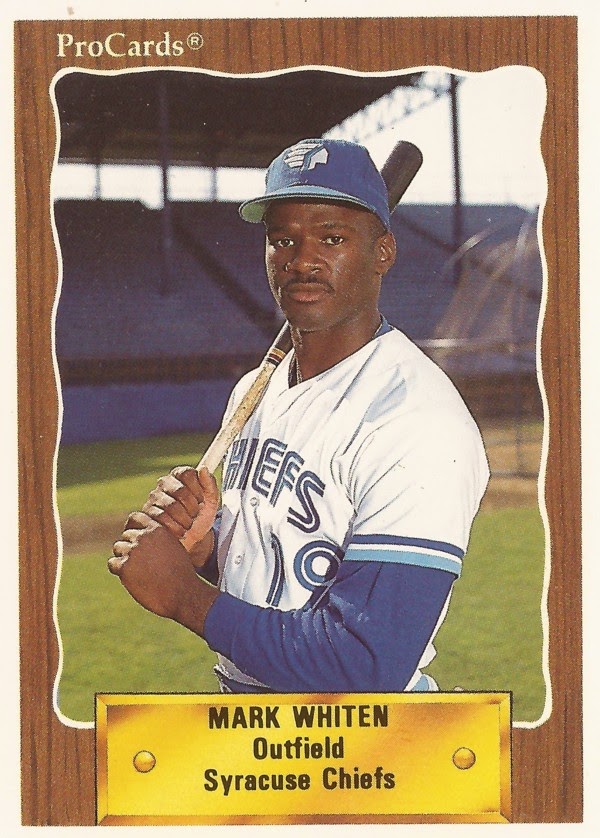 Mark Whiten had just hit four home runs in a single game, Sept. 7, 1993, and he was at a loss to explain it. He settled on a basketball reference.

"It's like when Michael Jordan gets 'in the zone,'" Whiten said in an Associated Press story on the feat. "He's going to score 50 points. That's kind of the way it felt. It didn't matter."

It was a game to remember, one befitting his naturally rhyming moniker, "Hard-Hittin.'" But, his basketball reference notwithstanding, the Hard-Hittin' name might have just has easily been a completely different sports reference.

Whiten began his career with Toronto, taken in the fifth round of the 1986 January draft. He had only taken up baseball at the age of 17. It was a means to stay in shape for football, he told the New York Times in 1997.

"My coach wanted me to," Whiten told The Times. "I didn't like running track. It was track or baseball, and I wasn't going to run."

The Blue Jays drafted him out of junior college. In 1987, at Myrtle Beach, Whiten made the South Atlantic League All-Star team. He also got a spot in the movie Bull Durham, albeit fleeting. A newspaper with a headline referencing Whiten was used during the 1987 filming, according to IMDB.com. It's visible during the bus scene.

Whiten made AA Knoxville in 1988 then AAA Syracuse and Toronto in 1990. He was in the majors for good in 1991. That's the same year the Blue Jays traded him to Cleveland, the first of many team changes Whiten underwent during his career.

"Well, it really hasn't dawned on me yet," Whiten told Sports Illustrated two days after the game. "I hit four home runs and drove in 12 - that's all I know."

Whiten's stay in St. Louis only lasted two seasons, one of the longest stays in his career. He would go on to make six more stops, for Boston, Philadelphia, the Yankees, Seattle and Cleveland again.

Whiten's last major league game came in 2000, with the Indians. He made stops in Mexico and the independent circuit through 2003 and his playing days were done.

The Times noted frequent change of address in its 1997 article. Whiten told the paper he just went out and played.

''It's nice to have stability, but it's no big deal,'' Whiten told the paper. ''Baseball is baseball wherever you go. I don't worry about it anymore."