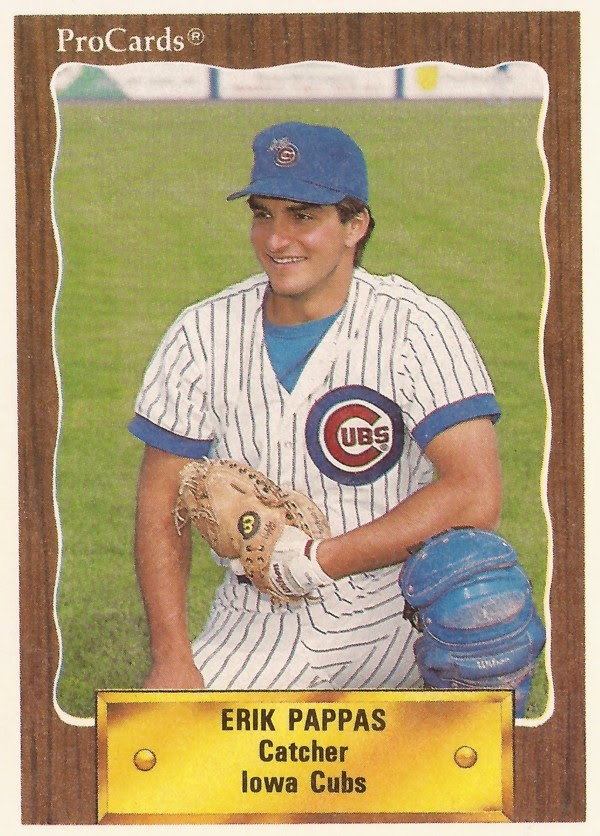 Erik Pappas had a dual role in 2004, helping his team win, and helping the fans learn the game.

Pappas was a member of the Greek Olympic baseball team.

"We have to teach them how to play the game the right way and get the fans excited,'' Pappas told The New York Times that July. ''Hopefully, they can start playing at 5 years old and be no different than us. But they have to start at that young age.''

Pappas joined the "ragtag" Greek team after being out of baseball for eight years. He last played professionally in 1996, working in the interim as a stock trader. The Chicago-native fit the Olympic requirement. His father was Greek and his grandfather lived in Greece.

Pappas' pro career started 20 years earlier, in 1984, taken sixth overall by the Angels. He spent four years in the Angels system before being picked up by the Cubs for 1989.

With the Cubs' AA team the Charlotte Knights, Pappas made a name for himself. It wasn't at his usual position of catcher, but he was making his name everywhere else.

He'd played seven different positions for the Knights by July 2, including pitcher, which he played that night in a blow-out loss.

"I've never done anything like this before," Pappas told The Rock Hill Herald. He hadn't pitched since Little League. He added later, "I'm just glad to get in the line up any way I can."

It was 1993 that turned out to be Pappas' most productive year, playing in 82 games with St. Louis and posting a .276 batting average. He even had a 16-game hitting streak that year, not equaled by a Cardinals catcher for 14 years.

Pappas joined the Greek team, alongside future star Nick Markakis, after having been found by an Orioles' international scout. Orioles owner, Greek-American Peter Angelos, bankrolled the team, according to Baseball America.

"I was playing absolutely no baseball," Pappas told Baseball America that July. "I had no interest in playing in those over-30 leagues. I heard about the Olympics and Greece maybe having a team about five years ago, and thought, "That's great. I'll be 38.' I didn't think the team would concern me."

But the 38-year-old major leaguer-turned-stock trader played. He even hit a home run.

Pappas has since started a coaching career. In 2015, he's serving as hitting coach with the Cardinals at AA Springfield.