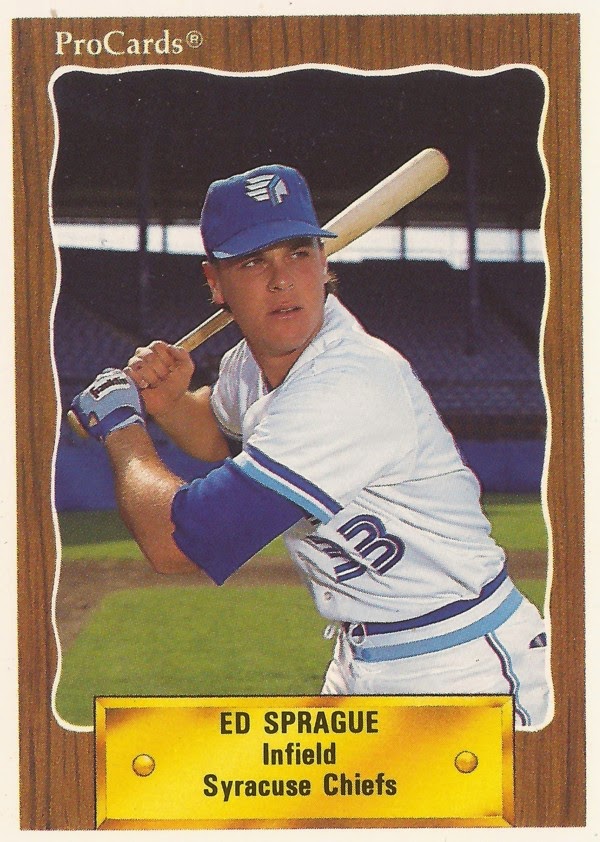 The Stockton Record asked Ed Sprague directly in 2008 about steroids. He responded that he couldn't condemn all steroid users, because he'd used Andro and amphetamines.

"I took Andro, and they banned that," Sprague told The Record. "So, am I the cleanest guy? No, but I tried to be as strong and as healthy as I could as long as I could for my career."

It began in 1988, taken by the Blue Jays in the first round of the draft. He had done well in college, but almost made Toronto question why they'd drafted him. In one College World Series inning, the infielder booted three balls, leading to a Stanford loss.

"All I wanted was some redemption for me," Sprague told reporters. "They just kept hitting it to me and I just kept kicking it."

But once in the Toronto system, Sprague moved up quickly. He spent 1989 at single-A Dunedin then jumped to AAA Syracuse. He returned to Syracuse for 1990, then got his call-up to Toronto in 1991.

His major league debut came in May 1991.

"I was catching at Syracuse, but I was swinging a good bat," Sprague said in the Los Angeles Times. "Maybe that's why they brought me up."

In game 2 of the World Series, Sprague came to bat as a pinch hitter in the ninth inning. He hit one out to win the game. He was also able to retrieve the ball from the fan who caught it.

"Only cost me an autographed bat and autographed ball," Sprague told Sports Illustrated. "I would have given the lady a thousand bats and balls. I got off cheap."

Sprague stayed with Toronto into 1998, when he was traded to Oakland for a minor leaguer. Arguably his best year came in 1996, when he hit 36 home runs. Otherwise, he never hit more than 22 home runs in one year.

Speaking to The Record, Sprague said he didn't recall, but he could have taken Andro in 1996.

Sprague went through four more organizations from 1999 to 2001, ending his major league career. He signed with Texas for 2002, but never got called back up.

Sprague has moved on to coach college baseball at the University of the Pacific. He's entering his 12th season there in 2015.