Read the July 2011 interview: Dave Machemer, Credit to Others 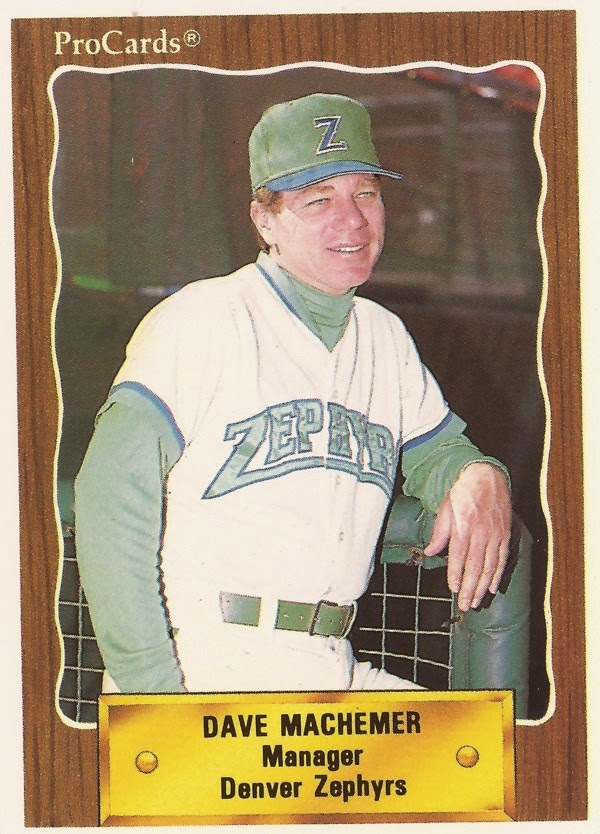 Dave Machemer's win total was big. But it wasn't about the wins, he told The Augusta Chronicle in 2010. It was about developing players, and doing something he loved to do: managing.

"Ever since the Brewers called, I knew what I wanted to do, and there's nothing else I want to do," Machemer told The Chronicle, referring to his first managerial job in the 1980s. "Going into an office every day is good for some people, but it isn't for me. There's always something new out here. It's never boring."

Machemer is managing his latest team for 2011, helming the Richmond Flying Squirrels, the Giants' AA affiliate in the Eastern League.

Leading into Machemer's long minor league managerial career was a long playing career, one also spent largely in the minors. It was also one where he hit one total big league home run - one that came on his first major league at bat.

Machemer's career in baseball began in 1972, taken by the Angels in the fourth round of the draft out of Central Michigan University.

Machemer made AA El Paso in 1975, then AAA Rhode Island with the Red Sox in 1976. He returned to the Angels system for 1977, making his debut with California in June 1978. That June 21st, Machemer led off the game - and his career - with a home run to left.

"It's a great thrill," Machemer told The Associated Press after the game. "I was really happy running those bases, as you could probably tell."

His playing career ended for good in 1982, playing at AAA. His managerial career began in 1984, managing with the Brewers at single-A Beloit. By 1985, Machemer was managing at single-A Stockton, returning for 1986. He was also praising his team for a 20-7 rout over Ventura County that July.

By 1989, Machemer was managing at AAA Denver, staying there for 1990. He also managed in Mexico, winning the league title with Mexicali by 1989.

Machemer stayed with the Brewers through 1997, moving to the Orioles system and single-A Delmarva for 1998. At Delmarva, Machemer also managed a young Jayson Werth. Machemer provided some early advice for the current Nationals slugger.

"He hasn't hit with the kind of power we know he has," Machemer told The Baltimore Sun of Werth. "He has a slight uppercut in his swing. And sometimes he thinks too much and takes too many pitches. But he is young and he'll get there."

Machemer moved to the Expos system for 2002, then the Giants' system for 2005. He's been with the Giants since then. In July 2009, with Augusta, Machemer's team scored 11 runs - nine in one inning - en route to extending its winning streak to six, according to The Chronicle.

"Hitting's contagious," Machemer told The Chronicle. "That was a big inning for us, and things got to snowballing, and it's a good thing they did."

Read the July 2011 interview: Dave Machemer, Credit to Others