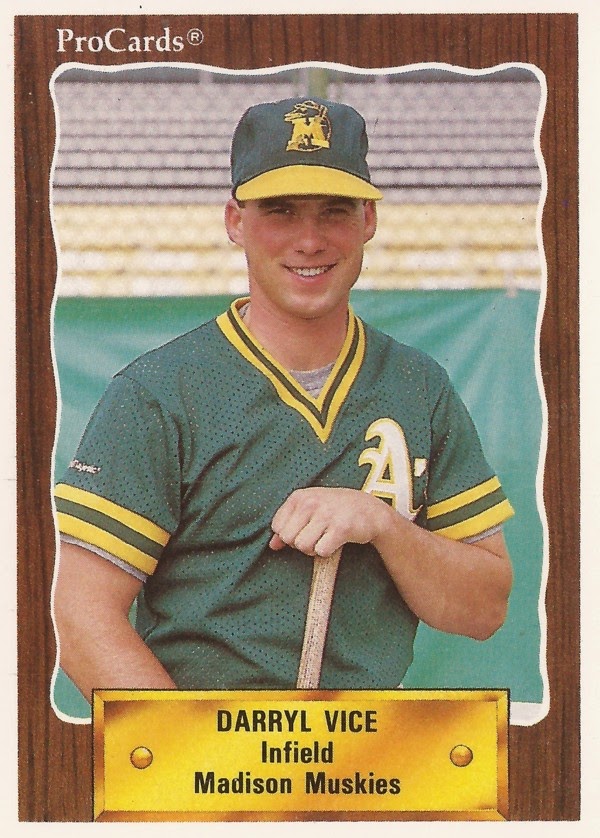 The Orlando Cubs needed a hit and pinch hitter Darryl Vice came through - with a home run.

Vice's eighth inning shot in this May 1993 game plated three runs and sent his AA team on to a 6-4 win, The Orlando Sentinel wrote.

That home run was one of three Vice hit for Orlando that year, his fifth pro season. It was also his last pro season. Vice never made the majors.

Vice's career began in 1989, taken by the Athletics in the 16th round out of the University of California, Berkeley.

Vice started his career at single-A Modesto. He hit just .184 in 78 games. He played 1990 between Modesto and single-A Madison. He also got into seven games at AAA Tacoma. He hit .260 between the three levels, with three home runs.

Vice has gone on to work as a teacher and in real estate. He's also coached in high school. In 2013, he spoke with The Santa Rosa Press Democrat about one of the players he'd coached named Justin Fitzgerald.

"The one thing Justin had to work on the most," Vice told The Press Democrat, "was his composure. He had to control his emotions. He was 6-foot-5, had good mechanics, good control and good stuff. But you need to forget that last pitch and concentrate completely on the next. It's what separates the pitchers who make it from the ones who don't."
1990 CMC-Pro Cards Tally
Players/Coaches Featured: 1,985
Made the Majors: 890-44.8%
Never Made Majors:1,095-55.2%-X
5+ Seasons in the Majors: 381
10+ Seasons in the Minors:220
Posted by Steve78 at 9:54 PM