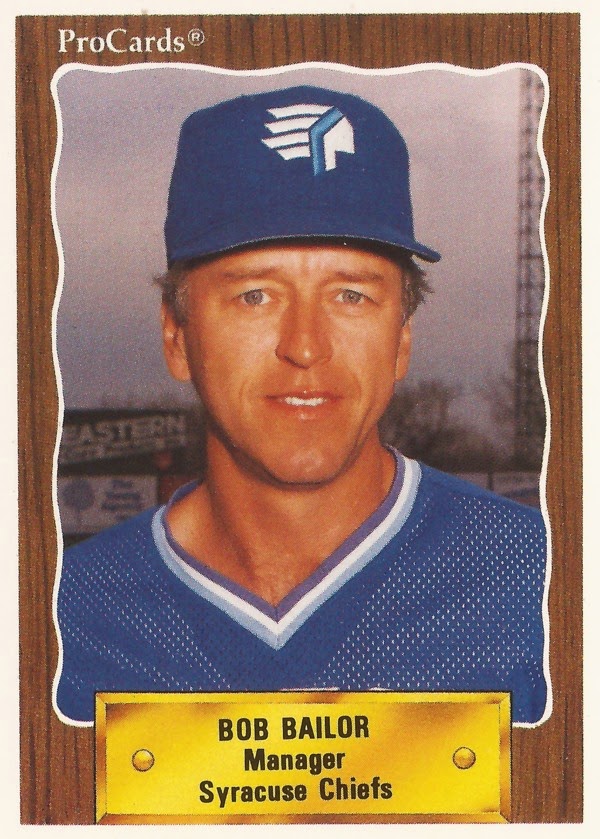 Major league veteran Ozzie Virgil tried to return to the majors and his manager at AAA Syracuse Bob Bailor tried to help him get there.

Virgil had last played in the majors the year before, getting into more than 100 games for the Braves. He'd signed with the Blue Jays, trying to continue his career.

"He realizes this is a chance for him to get back to the big leagues," Bailor told The Newport News Daily Press in July 1989. "He's been working hard."

Virgil, then a veteran of eight seasons, did get back to the majors, twice. The returns, though were brief, all of 12 games.

Bailor, a veteran of 11 major league seasons himself as a player, would also get back to the majors himself, named in 1992 as the first base coach of the big club in Toronto. Bailor also arrived in the majors just in time for the first of his and the team's two trips to the World Series.

Bailor's coaching career began by 1987, serving as manager of single-A Dunedin. His long playing career ended in 1985 with the Dodgers, Bailor also having played for the Orioles, Blue Jays and the Mets.

By 1988, Bailor had made the jump to AAA Syracuse, serving the first of four seasons at the helm of the Jays' top farm team. In 1990, Bailor also managed the American League team in the AAA All-Star game.

One of the players Bailor had on his final two Syracuse teams was Derek Bell, a player who was at the start of his decade-long career in the majors. For Bailor's Chiefs in 1991, Bell hit .346. He also got his first call-up to the majors.

"He's like a young deer in the woods," Bailor told The South Florida Sun-Sentinel in spring 1992. "He likes to run, rove, have fun. A carefree kid."

In spring 1992, Bailor was starting his new job, as first base coach for the Blue Jays in Toronto, a job he held for four seasons. Bailor's last season with the Blue Jays was in 1995. He isn't recorded as coaching elsewhere after that.

That first October, Bailor and the Blue Jays were he champions of baseball. Speaking to The Baltimore Sun, Bailor recalled his days as a player. He was an original Blue Jay in 1977.

"It's a wonderful feeling, because it's a great town and a great organization," Bailor told The Sun. "I would have liked to have spent my whole career with this team. But one of the things that makes this organization so successful is that they [the front office] don't let guys stay beyond their time. It's hard, but that's part of baseball."