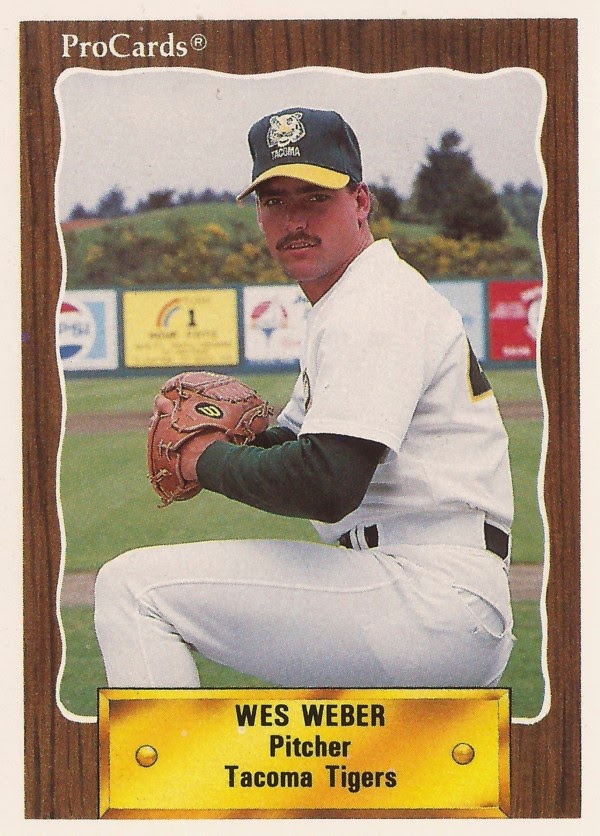 After 11 seasons, all spent in the minors, Weston Weber thought he might finally reach his goal of the majors in 1996, he told The Las Vegas Review-Journal later.

Then his career ended - on one pitch.

"I threw a pitch and I had severe pain in the back of my shoulder," Weber told The Review-Journal, which noted the diagnosis of a nerve impingement. "Every time I tried to throw a ball after that, it felt like somebody was shooting me."

Weber never did pitch competitively again. But he has since gone on to a sports-related career. That's golf-related.

Weber's baseball career began in 1986, taken by the Athletics in the 15th round, out of Mankato State.

Weber played that first year at short-season Medford. In 13 starts, he went 5-5, with a 3.44 ERA. That August, Weber went eight innings, giving up just two hits in what would be his fifth win.

His first look at AAA came in 1990 at Tacoma. By the end of the year, Weber was with his home state Twins, playing at AAA Portland.

Weber, though, was back in the Oakland system for 1991. He played through 1996, going through the Mariners and Padres systems. In 1996, his final season, Weber pitched in only seven games, all in relief.

The same year as his baseball career ended, his golf career began. Weber founded Southwest Greens, a company that specializes in synthetic golf greens for practice. He operated the company into 2008, according to a company Web site, when he sold corporate operations to a group led by another pitcher, John Smoltz.