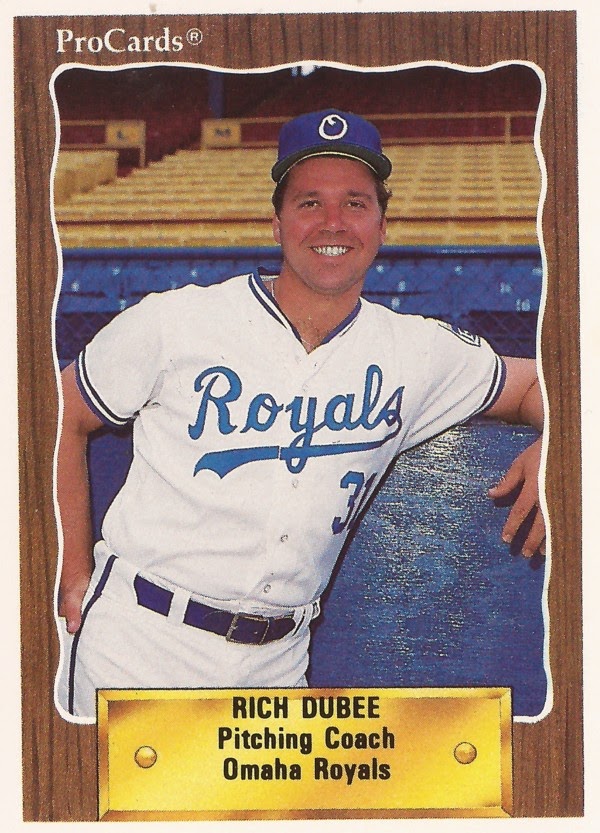 Rich Dubee's job appeared to get easier after the 2010 season when his Phillies signed Cliff Lee, now one of four aces on his Philadelphia staff. But, as spring 2011 opened, Dubee was quick to point out, there were games that still had to be played.

"We still have to play baseball," Dubee told The Philadelphia Inquirer that February. "I mean, we are absolutely thrilled with our starting rotation. You can’t downplay that. I don’t think anyone who has ever seen baseball would downplay it. But the fact of the matter is we have to play 162 games and play up to our potential."

Dubee's career as a pitching coach began after a brief career as a pitcher, drafted by the Royals in the third round of the 1976 draft. His pitching career, however, lasted just six seasons, getting as high as AAA Omaha in 1981, but no higher. Dubee's son Michael Dubee is now following him on the pitching mound, pitching in the Pirates organization.

Rich Dubee's coaching career began that next year, at the Royals AA team in Jacksonville. He stayed with the Royals system through 1990, returning to Omaha for four of those seasons.

At Omaha in 1990, Dubee watched over a veteran pitcher named Jay Baller.

"One thing he does is go right after hitters," Dubee told The Chicago Tribune of Baller. "He's very aggressive. We also liked that he never had any arm problems and he has the ability to throw four pitches in the strike zone. . . . Velocity is sometimes overrated."

After moving on to coach in the Expos system for 1991, Dubee arrived in the Marlins system for 1994. He served his first stint as a major league pitching coach with Florida in 1998. He stayed there for four seasons.

That first season as the Marlins pitching coach, Dubee watched over a pitching staff that was young. On a road trip to New York, Dubee hoped his young pitchers would learn something by watching a veteran pitch in Roger Clemens, according to The South Florida Sun-Sentinel.

"That's a big part of the learning process for our guys, watching how the experienced pitchers perform,'' Dubee told The Sun-Sentinel in June 1998. "Their presence on the mound, their tempo, how they handle things. Their composure on the mound helps set them apart."

He arrived in the Phillies system in 2002, serving as pitching coach for high-A Clearwater. He moved to AAA Scranton in 2004, then Philadelphia in 2005.

In 2003, at Clearwater, Dubee watched over the Phillies' current home-grown ace, Cole Hamels. The two reunited in 2006 in Philadelphia. In spring 2007, Dubee worked with Hamels to refine his pitches, MLB.com wrote.

"The numbers don't tell the story," Dubee told MLB.com after watching Hamels pitch. "There were a lot of positives today. His arm speed got better, his angle got better, and his velocity got better. Those are all positives."