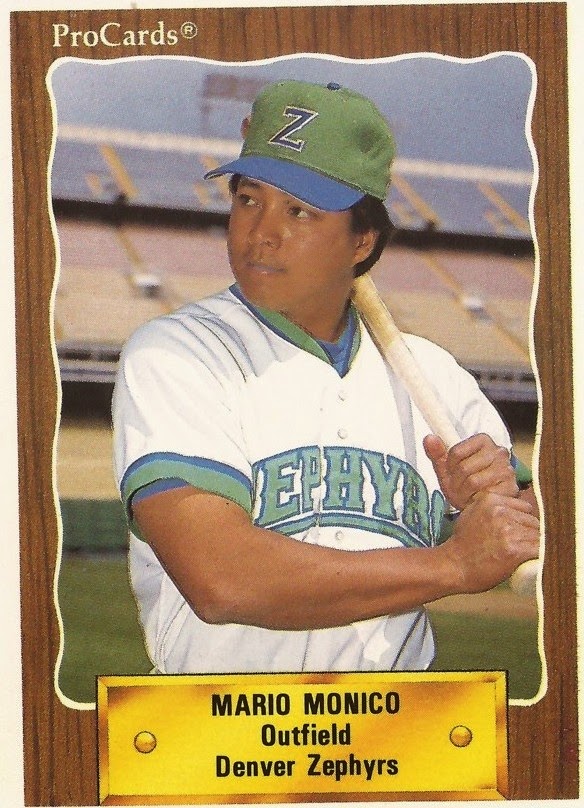 A quarter century after he played there, Mario Monico, one of the program's "most prolific hitters," is still a record holder at the University of Hawaii, The Honolulu Star-Advertiser wrote in September 2010.

Though it might have been hyperbole, The Honolulu Star-Bulletin recalled in 1997 that Monico was so good he "could hit a ball bearing with a No. 2 pencil."

Given that start, Monico was selected in the 12th round of the 1985 draft by the Brewers. But, after six seasons as a professional, Monico's career ended, short of the majors.

Monico started his career with the Brewers in 1985 at single-A Beloit, hitting .284. He spent the next two seasons at single-A Stockton, hitting .315 and .293 respectively.

In April 1986, Monico hit a two-run single for Stockton. In June, he hit a three-run home run against Modesto, and off former University of Hawaii teammate Bruce Walton, The Modesto Bee wrote.

In August 1987, Monaco cleared the bases with a double. He also hit solo home run that game, capping off a 6-12 hitting run., The Bee wrote.

He didn't make AA until 1988, at El Paso. There, he put up a stellar .342 average with a career-high eight home runs. In July 1988, The Milwaukee Journal attributed Monico's success and other Brewers' prospects' success in El Paso to the ballpark there. By that time, Monico was hitting .352 with 39 RBIs.

Monico remained at Denver for 1990, knocking in two runs in an early April game. They were among 38 runs he knocked in that year. He also hit .263, but that year turned out to be his last. He didn't make the majors.

In 1997, The Star-Bulletin used Monico as an example of a Hawaii-native who was good, but never got the call. The paper was arguing for the Mets to bring up another native Hawaiian, Benny Agbayani. Agbayani finally got called up the next season and played in parts of five.

Monico has since coached with the Hawaii Island Movers, a team of collegiate baseball players, a job he continues in 2015. He is also now watching his son Jordan Monico play ball, though mainly football. Jordan Monico plays on the University of Hawaii football team, according to The Star-Advertiser.

Jordan told The Star-Advertiser that his father "was supportive in everything I did and was there to work with me, lifting weights, running, giving me pointers."