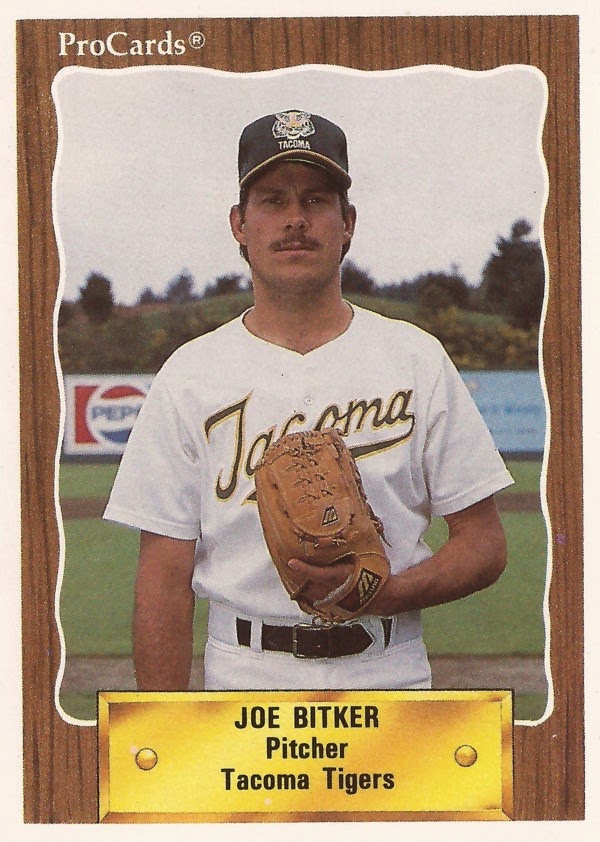 After being cut during spring training 1987, Joe Bitker met with his manager, Larry Bowa.

Coming out of that meeting, Bowa told The Los Angeles Times, the manager believed Bitker showed the attitude he needed.

"I'll be back in a month," Bowa quoted the young pitcher as telling him, according to The Times. The pitcher added later, "I mean it. I will be back."

Bitker did return, it just took a little longer than he'd hoped: It took him three years. His career would also end sooner than he'd hoped, pitching in two major league seasons, his last in 1991.

Bitker's career began in 1984, taken by the Padres in the second round of the draft. He played that year at short-season Spokane, going 4-4 with an ERA of 3.41.

Bitker then pitched a complete game in August for a win, not allowing a base runner through six. He pitched another complete game later in the month, but got the loss.

The next year, Bitker broke out, going 17-4 on the year, splitting the season between single-A Charleston and AA Beaumont. In an April start with Charleston, Bitker gave up four runs early, but settled in for the win.

In another April start, he pitched a complete game, striking out nine. "I was basically getting ahead with a fastball and by changing speeds," Bitker told The Charleston News and Courier after that game.

Bitker stayed at Las Vegas for 1988 and returned to Las Vegas in 1989. That June, Bitker was released. Soon signed by Oakland, Bitker played out the year at AAA Tacoma.

Bitker finally got his call in 1990. He pitched in one game for Oakland, July 31, 1990, going three innings and giving up one hit.

Oakland then sent Bitker and fellow pitcher Scott Chiamparino to the Rangers to complete an earlier trade for Harold Baines. With Texas, Bitker got into five games, giving up three runs in nine innings of work.

In 1991, Bitker got into nine more games. He also got his only win. Called up May 26, Bitker pitched two scoreless innings against Seattle.

Bitker got his win June 16, pitching four innings without giving up a hit. Those four innings ended a 15-inning game. It was his second-to-last major league game.

His last came three days later, giving up three runs in an inning of work. Bitker finished out the year at AAA Oklahoma City, ending his playing career.