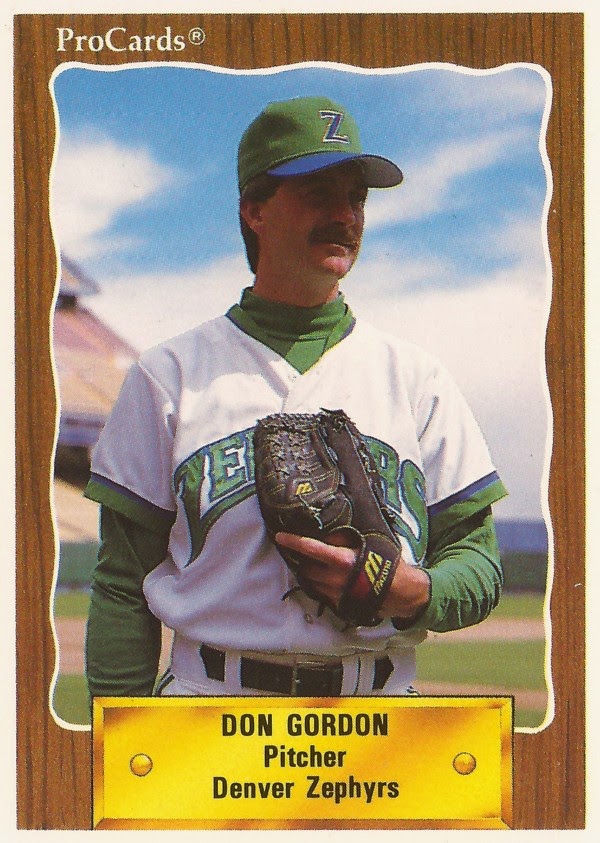 Fifteen thousand fans at County Stadium wanted it and Don Gordon did his best to prevent it.

But, Gordon's best wasn't enough. Paul Molitor slapped Gordon's first pitch through the right side, making this game, Aug. 25, 1987, Molitor's 39th consecutive in which he got a hit.

"I can't say I was worried," Molitor told reporters afterward, the day before his streak would be broken, "But it looked like one of those nights when you swing the bat well and come up empty."

Gordon gave up a few hits in his time, 150 to be exact, in a major league career that spanned three seasons.

Gordon began his pro career, selected in the 31st round by the Tigers in the 1982 draft. He made AA Birmingham his second year, but was released by mid-1984. Picked up by the Blue Jays, Gordon made AAA Syracuse in 1985, earning International League Pitcher of the Week honors in June, and Toronto in 1986.

In 21.2 innings for the Blue Jays in 1986, Gordon gave up 17 earned runs. On May 6, Gordon gave up four runs to the A's, helped along by his own errant throw to second. But in a game June 16, Gordon pitched the final four innings, notching his first save.

He returned to Toronto for five more games in 1987, before being taken by the Indians off waivers in August, two weeks before giving up the Molitor streak-extending hit.

Back in Cleveland for 1988, Gordon pitched in 38 contests, earning a spot in the Indians' "Bullpen From Hell," a nickname given not out of admiration. Gordon himself posted a 4.40 ERA, in what would be his final major league year.

Gordon went on to play AAA for the Indians in 1989, then signed on with the Brewers for 1990, playing at AAA Denver. Then it was AA El Paso with the Brewers and back to the Blue Jays system at Syracuse in 1991 and his playing days were done.

His playing days done, Gordon was working with a missionary group by 1996, SCORE International, according to the Boston Irish blog. The blog has an account of the trip, posted in 2009.