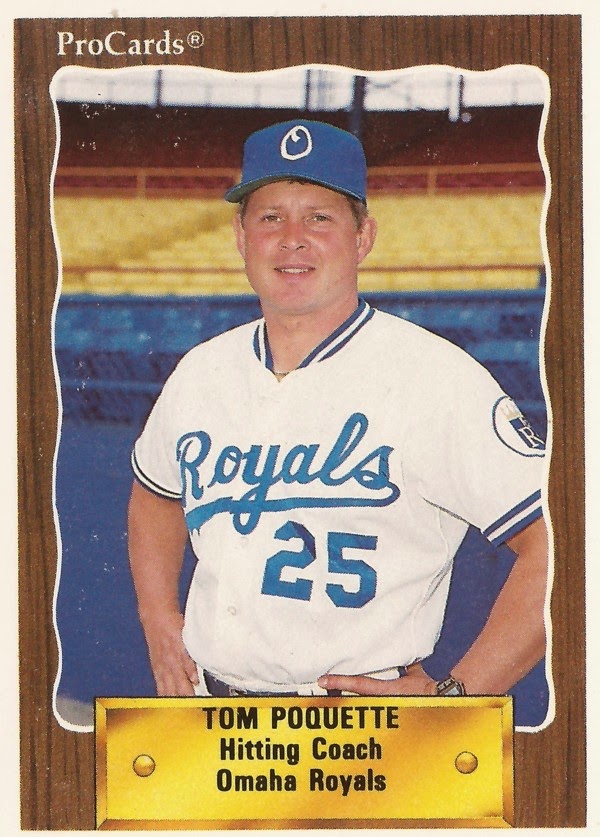 Days away from the start of the season in 1991, the Eugene Emeralds' usual young and untested players arrived for the year.

They arrived to play for a manager who, while he had been tested on the baseball field, hadn't yet been tested in the manager's office: Tom Poquette.

"When we were talking to them, they listened," Poquette told The Eugene Register-Guard that June. "It was great to see that. There's a lot to learn and we've only got a week to learn it."

Poquette had been off the playing field for nearly a decade, having played parts of seven seasons for the Royals, including for division winners. He began his post-playing coaching career in 1989, serving as hitting coach for the Royals at AAA Omaha, serving in that post for two seasons.

He has gone on to a coaching and managerial career that has spanned nearly two decades, one that got him back to the majors as the Royals hitting coach and one where he was last reported as the hitting coach of the rookie Arizona Royals in 2007.

With Eugene that first year, Poquette took those Emeralds to a 42-34 record. The next year, the Royals promoted him to manage the single-A Appleton Foxes. With Appleton, Poquette led the team to the first half division title and a 70-62 record overall.

For 1993, it was AA Memphis. Poquette's team went 63-77. One of those wins came in a June 27 game against the Daytona Cubs, off a seven-inning performance by Memphis hurler Brian Bevil.

"Brian has done an outstanding job for us," Poquette told The Orlando Sentinel. "He has a good fastball, changes speeds well and throws strikes."

By early August, the Royals hitters had gotten hot, The Associated Press wrote, at one point hitting nine home runs in the span of two games.

"The key is hitting it where it is pitched," Poquette told The AP. "If you do that the home runs will come."

The hot hitting, however, didn't last. He held the top hitting post through the end of 1998, when he was let go.

Poquette went on to return to the manager's office, managing single-A Charleston in 1999, then returning to the Northwest League in 2000 as manager for Spokane. He stayed there through 2002, then the rookie Arizona Royals from 2003-2007.

In August 2002, still the manager at Spokane, Poquette watched hurler Danny Christensen lower his ERA to 0.93 after in five starts, The Spokane Spokesman-Review wrote. Supporting Christensen was a lineup that that produced three runs and included hitter Trey Dyson.

"We had good situational hitting tonight," Poquette told The Spokesman-Review. "Dyson dropped a bunt on his own (in the fourth) that led to our third run. The guys are learning how to get the job done."