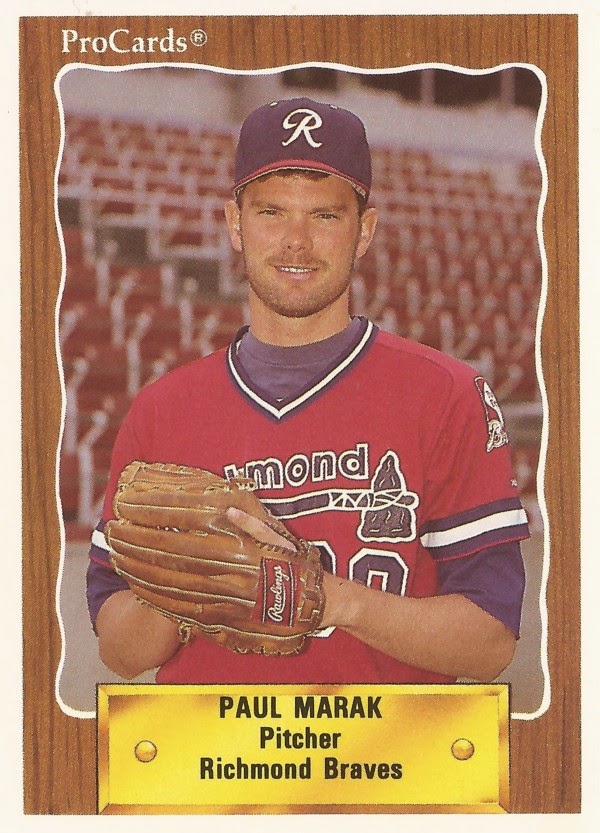 Paul Marak's fastball topped out in the high 80s, and that was on a good day, he told The Associated Press in 1991.

His career had gone about as fast, making the majors in September 1990, his sixth professional season.

"I don't throw a 90 mph fastball," Marak told The AP that March, as he vied for a spot in the Atlanta rotation. "That's why it's taken so long. I have to always prove to them I can pitch."

Marak was coming off a September where he went 1-2 in seven starts, but also posted a respectable 3.69 ERA. Despite that showing, and a good spring in 1991, Marak didn't play in the majors that year or ever again.

His career ended in 1993 after nine seasons and seven major league games played.

Marak's career began in 1985, as the native of Lakenheath, England, was selected by the Braves in the 11th round of the draft.

He played that first season in the Gulf Coast League, moving to the rookie Pioneer League for 1986. Marak hit single-A Sumter in 1987, going 12-5 there with a 3.13 ERA. In August 1987, Marak gave up two hits and no runs over 7.1 innings in a win over Fayetteville.

In his debut Sept. 1, Marak went 7.1 innings against St. Louis, giving up two earned runs. He soon had two rocky starts, giving up five runs in each. But, on Sept. 23, he went the distance. And didn't give up a run.

"After the eighth, I really wanted a shutout," Marak told The AP after the shutout. "I may not have shown it but I was really pumped up inside."

Going into 1991, Marak was penciled into the Braves' rotation, part of what was called that spring as the best rotation the Braves had in years.

Marak made the rotation. But, in April, he wasn't needed. He'd been scheduled to start one game, but a rainout meant his services weren't needed.

"What can you do?" Braves Manager Bobby Cox told reporters after Marak lost his start. "You have to keep going with your rotation. You're not going to keep everybody happy, it's impossible."

Marak spent the rest of the season at AAA Richmond. He went 10-13 with a 5.85 ERA. The next year, he was with the Cubs, at AA Charlotte and AAA Iowa. It was his last year in affiliated ball.