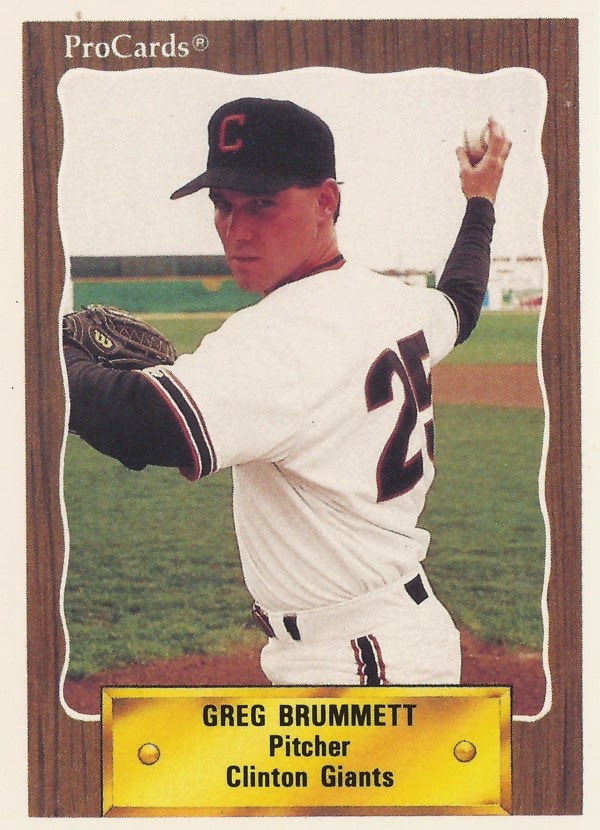 It was the championship game of the 1989 College World Series and Greg Brummett was on short rest, but he was still on.

After already winning two games for Wichita State in the tournament, Brummett closed it out against Texas, striking out six as he helped pitch his team to the title.

"I have my best stuff probably of the whole series," Brummett told The Associated Press afterward. "Three days rest was not enough. I was throwing on guts out there."

Brummett's career began shortly after that College World Series, taken by the Giants in the 11th round of the draft.

At Wichita State that year, Brummett went 18-2. His first win in Omaha came against Arkansas in a 4-2 decision. He was inducted into the school's Hall of Fame in 2009.

With the Giants, Brummett played his first season between short-season Everett and single-A San Jose. He went 4-3, with a 3.20 ERA.

He debuted May 29 against the Braves. He made it into the seventh inning and picked up the win after benefiting from an early lead.

"That probably helped out the most, getting that 2-0 cushion in the first," Brummett told The AP. "I just concentrated on keeping the ball down and getting some ground balls. Things worked out perfectly."

By Sept. 1, Brummett was with the Twins, sent there in a trade. He got five more starts there, going 2-1. He made it into the eighth inning Sept. 30, giving up seven hits, three earned.

That win ended up being his final game in the majors. He returned to AAA for 1994 and there was even talk he'd be called up, but he wasn't. He played out the year at AAA, missed 1995 and played one final season in independent ball in 1996, ending his career.

He's since gone on to a long coaching career in college, spending time at the University of North Carolina-Charlotte, the Air Force Academy and, most recently, at Cloud County Community College in Kansas.

In February 2011, Brummett's Cloud players picked up some early wins and earned praise from their coach.