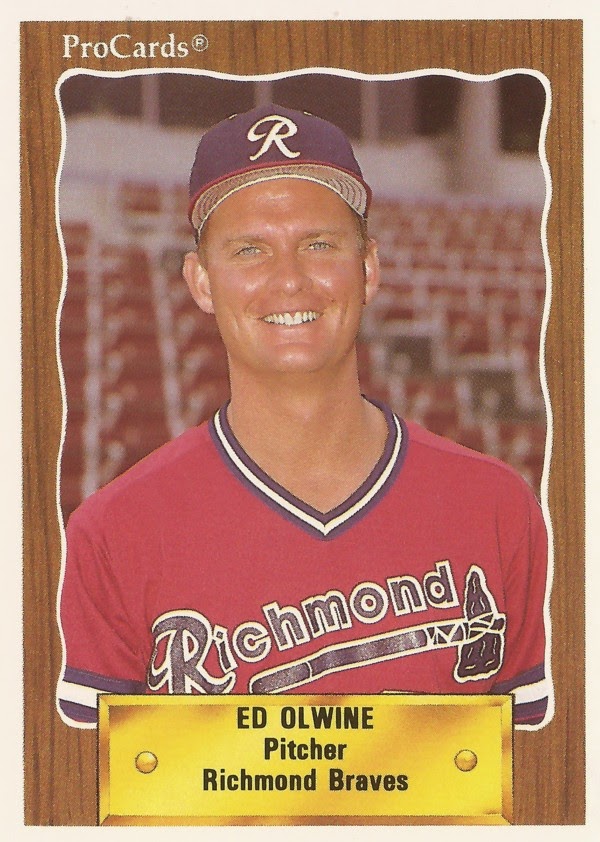 Going up against the Padres in August 1986, Braves manager started a rookie and ended with another rookie, Ed Olwine.

Starter Cliff Speck went 5.2 innings. Olwine went the final 3.1 innings, giving up one run and picking up his first major league save in the 3-2 Atlanta victory.

"It seems like we're always facing somebody we haven't seen before," Padres right fielder Tony Gwynn told reporters afterward. "If anything, they have the advantage. It takes a while before you can figure out what this guy (Speck) has got."

Both Speck and Olwine were new to the majors that year. The Padres, though, would have more chances to see Olwine, the reliever going on to pitch parts of two more seasons in the majors. Speck had just that one.

Olwine's career began in 1980, signed by the Yankees as an amateur free agent out of Morehead State University.

He started at rookie Paintsville, getting time at short-season Oneonta and single-A Fort Lauderdale. Between the three teams, Olwine picked up 21 appearances and a 2.40 ERA.

Olwine moved to single-A Greensboro for 1981 then went back to Fort Lauderdale for 1982. In 1983, he made AA Nashville and AAA Columbus, getting 37 appearances between them, and a 4.94 ERA.

For 1984, Olwine was taken by the Mets in the minor league draft, playing that year at AAA Tidewater. That August, Olwine and his starter combined on a three-hit shutout of Richmond.

It took an injury to a Hall of Famer and a sub-1 ERA for Olwine to get his first call to the majors, in 1986. Traded to the Braves, Olwine posted a 2-0 record and a 0.73 ERA by early June, when Bruce Sutter went down with an injury.

Olwine ended up staying the rest of the year in Atlanta, getting 37 outings, with an ERA of 3.40.

Olwine finished out his playing career with two seasons spent at AAA. He played 1989 with the Royals at AAA Omaha and 1990 back with the Braves at Richmond.