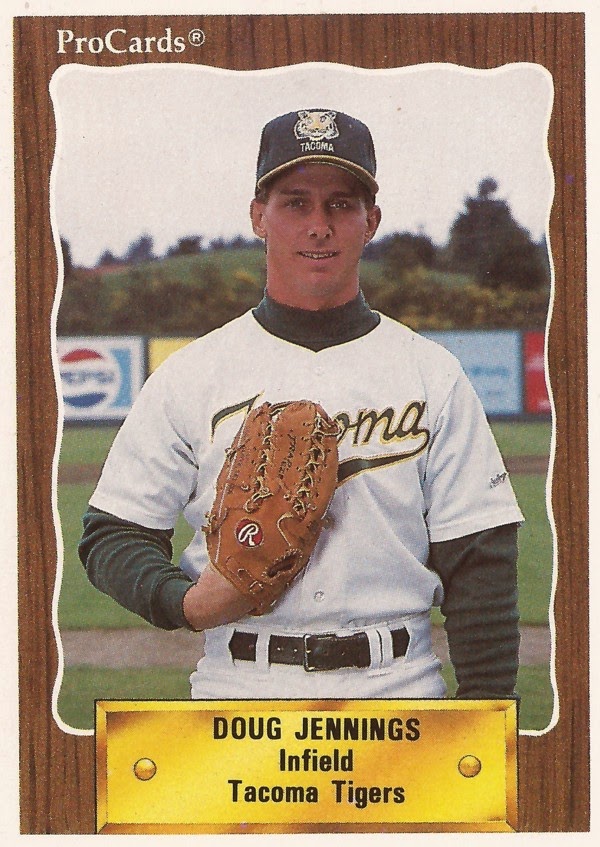 Doug Jennings' major league career got off to a quick start in April 1988 for Oakland. The Athletics had taken him from the Angels system the previous off-season. Now, in his first major-league start, Jennings went 4 for 4, hitting a home run and scoring four times.

"He was outstanding today," Oakland manager Tony LaRussa told the AP after the game. "That kind of hitting will get him more at-bats."

Jennings did well enough to stick with Oakland for most of the year. He would go on to a career that spanned five major league seasons, three more in Japan. It was also a career that didn't end until 2005, with Jennings serving as a player/coach in the independent leagues.

Jennings' professional career began in 1984, taken by the Angels in the second round of the January 1984 draft. He spent three years in A-ball, before making AA Midland in 1987.

It was his time in Midland that got him noticed, not necessarily by his own parent club. Jennings hit .338 and hit 30 home runs. After the season, when he should have hit prospect status, the Angels left him unprotected in the minor league draft. Oakland grabbed him.

Jennings quickly made the Angels remember him. In his second appearance for Oakland, and against the Angels, Jennings hit a pinch-hit double, clearing the loaded bases and sending Oakland on to an early season win.

"Considering the numbers I put up, yeah, I was a little surprised when I found out the Angels left me unprotected," Jennings told The Los Angeles Times after the game. "But I was happy when I found out that Oakland had selected me because I figured it meant I'd get a good opportunity to make the big league club this spring."

Despite his early success, Jennings ended the season hitting just .208. He returned to Oakland for just four games in 1989, but another 64 in 1990. Jennings' batting average dipped to .192 that year, but he still made the post-season roster, getting one at-bat in the World Series. He got a hit.

Jennings got in eight more games in 1991, before being released. Going through the Orioles system in 1992, Jennings got back to the majors with the Cubs in 1993. In 42 games, he hit .250, ending his major league career.

From 1995 to 1997, Jennings played in Japan, playing mainly for the Orix Blue Wave. Known by the initials D.J., Jennings once hit four home runs in a row.

Returning to the states, Jennings caught on with the independent Newark Bears, then the Long Island Ducks. He also got two more stints at AAA, with Omaha, then Indianapolis. His final season was in 2005, closing out four years as player/coach for Long Island.