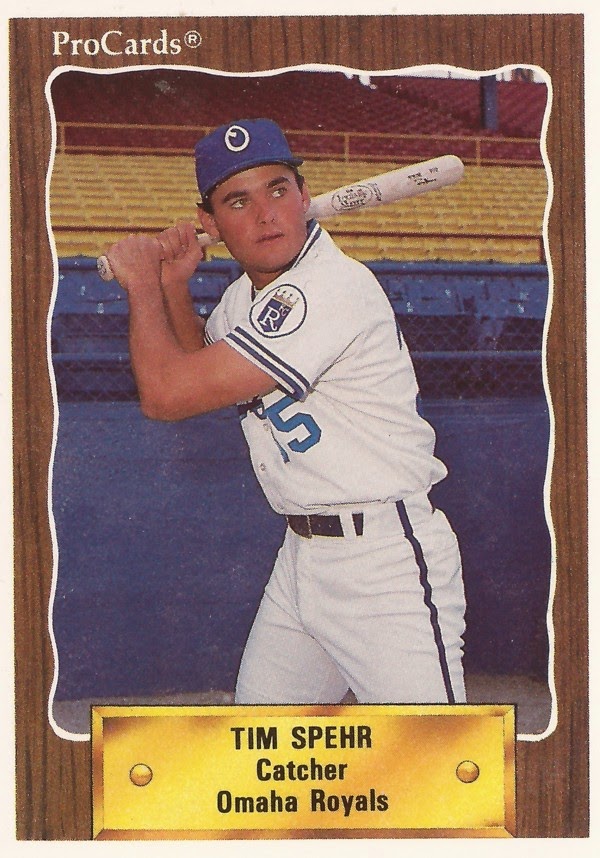 Tim Spehr played parts of eight seasons in the majors. The catcher hit 19 home runs, but not much else. His career batting average was sub-.200.

"I'm not a home run hitter," Spehr admitted to reporters after the game, according to a wire account. "I was looking to drive the ball and got it up in the air a little."

As for the reason for his unexpected power? His game bats from AAA hadn't arrived yet. He used one from the clubhouse. "It has good wood," he told reporters. "I hope I don't break it."

Spehr began his career with the Royals organization, taken in the fifth round of the 1988 draft out of Arizona State. He made AA Memphis in 1989 and AAA Omaha in 1990 and his first appearance in the majors in 1991.

He played in 37 games for the Royals in 1991. He also got mentioned alongside such names as George Brett and Hal McRae, if only because he got three doubles in one game July 29. Brett and McRae were the only other Royals to accomplish the feat, according to a wire account.

"I really only hit one well," Spehr said, according to the AP account. "Two of them just happened to fall in. But don't compare me to those guys. They did it over long careers and George is still doing it. I'm not even in the same breath as them."

After spending 1992 in the minors, the Royals sent Spehr to the Expos in a four-player deal. He returned to the Royals briefly in 1997, then had his brief stint with the Braves.

All the while, he never played in more than 63 games and never hit better than .257.

But that changed in spring 1998, in camp with the Mets. Spehr was not only hitting, but, during a 22 at-bat stretch, he hit .545 with three home runs and six RBIs, according to The New York Times.

"I wouldn't say this is so much of a fluke," Spehr told The Times in March. "I've been working hard the last couple of years on my offense. Maybe things are starting to come together."

But the hitting didn't continue. In 32 games for the Mets early that year, Spehr got just 13 hits for a paltry .171 batting average. Then he got hurt, breaking a bone in his wrist on a tag, according to The Times.

Spehr returned to the Royals later that season, then for 1999 and his major league career was done. After stints with the Red Sox' and Reds' AAA clubs in 2000 and 2001, Spehr was done.