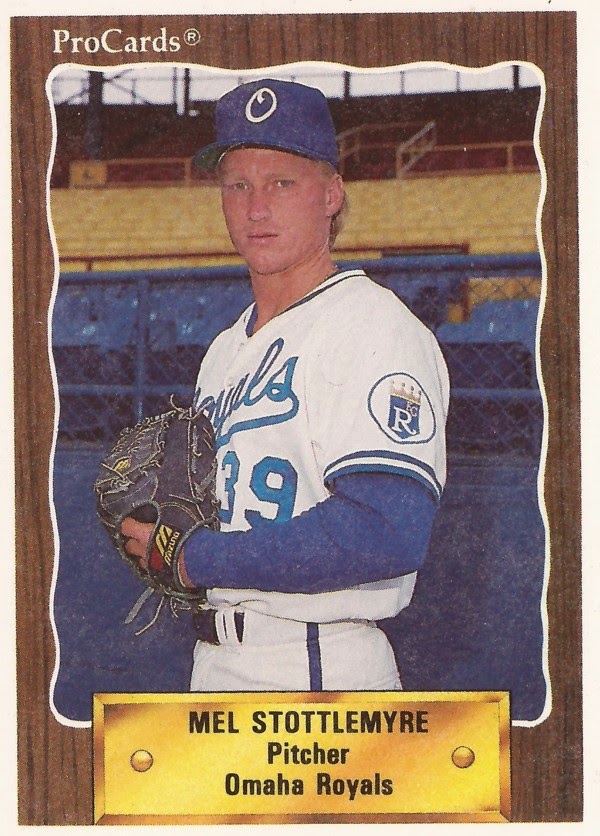 "I've been waiting for this a long time," Stottlemyre told The Associated Press.

Stottlemyre had waited until his sixth professional season to get that call. The call made him a major leaguer. It also made him the third major leaguer in his family, after father Mel Stottlemyre, Sr., and brother Todd Stottlemyre.

But, while he got there, the young Mel Stottlemyre couldn't match the success of his father and brother, each of whom had long playing careers in the majors. Mel Stottlemyre, Jr.'s major league career started and ended that year in 1990.

Mel Stottlemyre, Jr.'s, career began in 1985, taken by the Astros out of the University of Nevada, Las Vegas. He was also taken in the same January secondary draft as his brother Todd. Mel Jr. went third overall, Todd went first.

The father, then pitching coach with the Mets, compared his son's chances after that draft. Mel, Jr., being the older of the two, the father saw progressing faster.

"But Mel, being 21 and out of school, I would hope that within, say, three years, he'll be there, or on the doorstep," the father told The AP.

The younger Mel Stottlemyre started with the Astros at single-A Asheville. He went 5-4 in 13 starts, with a 2.75 ERA. He made AA for the first time in 1987, at Columbus.

Stottlemyre went 7-6 at Columbus, with a 4.29 ERA. Then, in late July, the Astros sent Stottlemyre to the Royals. Stottlemyre started 1988 back in AA, at Memphis. Stottlemyre, though, started just seven games on the season.

The next year, he started back at single-A, at Baseball City. In early June, Stottlemyre came into one game, overcoming two singles to get out of a jam, The Lakeland Ledger wrote.

"He was ready. He was just trying to get ahead" of the hitters, Baseball City manager Luis Silverio told The Ledger. "Then he settled down and started making his pitches."

Stottlemyre played the rest of the season back at Memphis. By 1990, he was at AAA Omaha. He got into 29 games in relief there, with those 13 saves and a 1.51 ERA. He also made the AAA All-Star team.

That year, Stottlemyre also got into 13 games with Kansas City, getting two starts. Overall, he posted a 4.88 ERA.

On July 29, Stottlemyre came in for a long-relief assignment, showing what he could do. He set down 14-straight batters at one point, before giving up a single, The AP wrote. He made his two starts in September. In the first one, he went seven innings, giving up just one hit and no runs. He also got a no decision.

It was Stottlemyre's final year as a player. He has since gone on to a career as a coach in the minors, and the majors. In 2009 and 2010, Stottlemyre returned to the majors, as pitching coach for the Diamondbacks. For 2011, and into 2012, Stottlemyre is serving as Arizona minor league pitching coordinator.

In April 2010, Stottlemyre worked with the Diamondbacks' Edwin Jackson, helping him become more methodical in his approach, The Arizona Republic wrote.

"That's something we talked about and worked on in his side (session) - improving his concentration and not trying to do too much too early in games," Stottlemyre told The Republic. "Basically, slow his mind and his body down and allow himself to make pitches and stay away from high pitch counts."