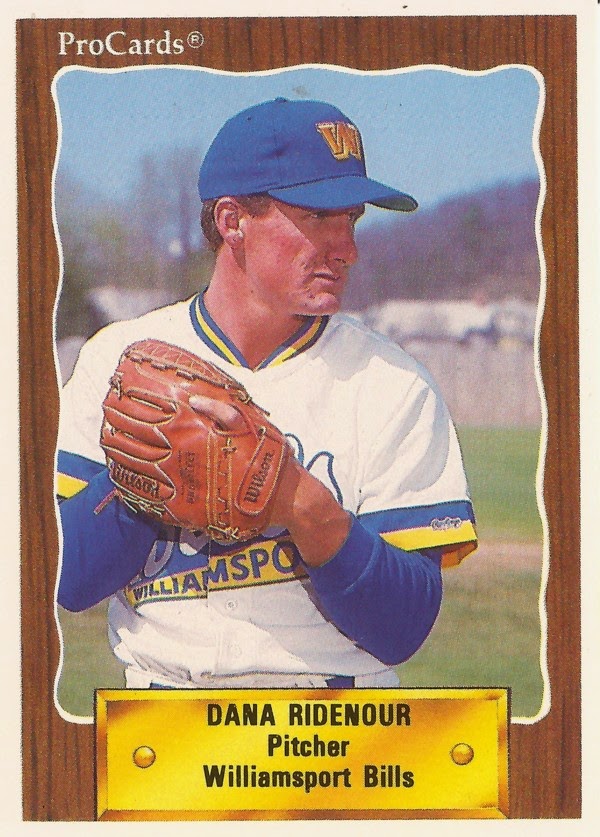 By that July, his use of his forkball and his other pitches had resulted in an ERA of just 1.19, according to The Sun-Sentinel.

"His fastball is good enough that hitters can't sit on it," Fort Lauderdale manager Buck Showalter told The Sun-Sentinel. "But his forkball is comparable to any I have seen. At times, it can be overpowering. The hitters haven't been able to do anything with it."

Ridenour ended up getting 21 saves for Fort Lauderdale that year, along with a 1.77 ERA. It was his second season as a pro. He went on to play in nine campaigns, but he never made the majors.

Ridenour's career began in 1986, taken by the Yankees in the 16th round of the draft out of the University of California, Los Angeles.

With the Yankees, Ridenour started at short-season Oneonta. In 23 relief outings, he had a 1.56 ERA, with eight saves.

He moved to Fort Lauderdale and had that stellar season in 1987, winning organizational Pitcher of the Year honors.

Ridenour moved to the Mariners for 1989, traded for Steve Balboni. He played that year between AA Williamsport and AAA Calgary, but his season was relatively brief, just 24 relief outings. He had a 5.50 ERA in 18 appearances there.

He moved to the Expos and AAA Indianapolis in 1991 and he stayed at AAA through 1994, his final season as a pro.

In July 1991, Ridenour was one of four pitchers to combine on a no-hitter. A one-two-three ninth in that game also resulted in Ridenour picking up his fourth save, according to The Associated Press. He also made the all-star team, going two innings of one-hit ball in the game.

In 1993, Ridenour pitched for the Rockies at AAA Colorado Springs. He also felt the pressure, that season being his eighth pro year, according to The Los Angeles Times.

"I'm definitely thinking that I need to make the big leagues soon," Ridenour told The Times, "but I'm not at the end of the rope where this is my last year. I know I can pitch at that level so I'm not discouraged."

Ridenour's final season came in 1994 at AAA with the Marlins.