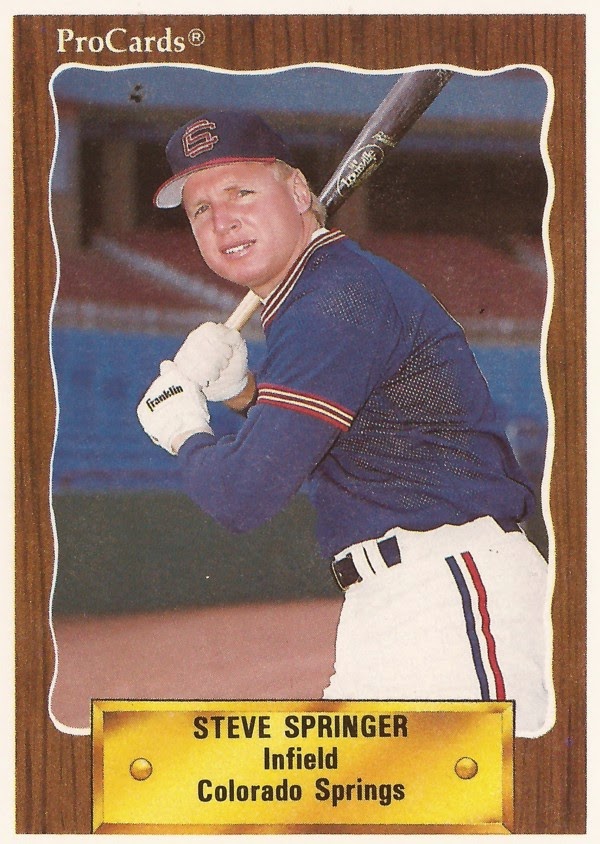 In the middle of his seventh professional season, fourth at AAA, Steve Springer was still working to make the majors.

He also tried his best not to get discouraged.

"As long as I stay healthy, I won't quit," Springer told The Los Angeles Times in July 1988. "There's too much money to be made up there, and I'm not that far away. I love baseball, and I want to coach when I'm done playing. I could always work for my dad, but I'd rather play."

Springer's time at AAA, however, was far from over. By the time his career ended in 1995, Springer spent time at AAA in a total of 11 seasons, more than 1,200 individual games.

His major league time by the time his career was done: Eight games. But his career in baseball has lasted much longer, most recently serving as a professional scout.

Springer's career began in 1982, taken by the Mets in the 20th round out of the University of Utah. He started at short-season Little Falls, moving to single-A Columbia for 1983, then AA Jackson for 1984.

It was in 1985 that Springer played his first game at AAA, hitting .261 with seven home runs that year for Tidewater. But it was in AAA that Springer would make his home.

He stayed at Tidewater through mid-1988, getting traded that August to the White Sox. He played at AAA Vancouver through 1989. For 1990, Springer signed with the Indians, starting at AAA Colorado Springs.

By 1993, Springer was playing in his ninth AAA season. He told The Times then that playing at AAA was better than the alternative, not playing.

To The Newport News Daily Press, Springer noted he'd been playing for far longer than what he had expected.

"I feel blessed to have come this far," Springer told The Daily Press. "If you wanted to bet someone when I came out of high school that I'd make it this far, you would have gotten some serious odds."

For 1994, Springer signed on with the Tigers at AAA Toledo. He told The Times that July it was tough for him to consider retiring. He'd been his AAA team MVP three of his previous five seasons.

"I don't know, he told The Times. "You play triple A you never know. You still have a chance."

Springer's career finally came to an end in 1995 with 60 more games at AAA.

Springer has since gone on to a career as a scout. In 1996, he found Rod Barajas, calling around looking for a catcher. One coach directed him to Barajas, and Springer called him in for a tryout, The Times wrote.

"He didn't do anything special," Springer told The Times in November 2001. "But it was obvious, he had bat speed, and he could play."

More recently, Springer is working as a scout for the Blue Jays. He talked the team into signing 25-year-old Wes Etheridge for 2011 out of independent ball. Etheridge has picked up more than 30 saves at high-A Dunedin.

Springer did so, he told The Calgary Sun in June, by looking past Etheridge's mid-80s fastball.

"I told him to forget readings, let him pitch," Springer told The Sun. "Everyone gets caught up in velocity."