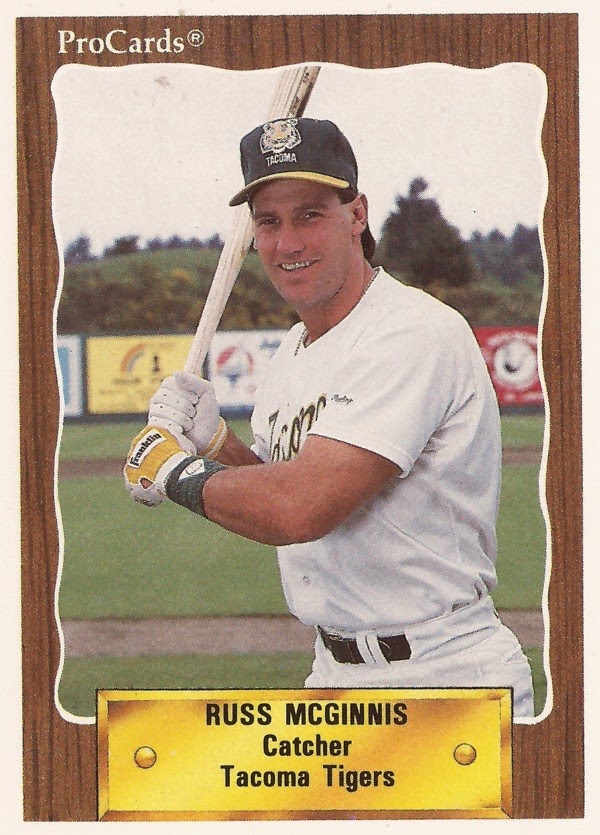 Russ McGinnis made the Royals roster out of the abbreviated spring training in 1995, a roster temporarily enlarged by three after the strike. By mid-May, the roster needed to be reduced and McGinnis was among the Royals players looked at for possible demotion.

McGinnis hoped he would stay.

"I think they will need some right-handed hitting with some pop," McGinnis told The Associated Press as the decision was being made, "and I definitely can do that."

McGinnis' journey to that point in 1995 began in 1985, when he was taken by the Brewers in the 14th round of the draft. He made single-A Beloit in 1986 and by mid-1987 he was traded. The Brewers sent him to Oakland for Bill Mooneyham.

He arrived in the Athletics' system showing some of that pop. In his first game at single-A Modesto that July, McGinnis hit a home run and drove in four, The Modesto Bee wrote.

McGinnis stayed with the Oakland system through 1990, first making AAA Tacoma in 1988, but he never made the big club.

McGinnis moved on to the Cubs' system in 1991, then the Rangers in 1992. It was that year that the catcher made the majors for the first time, filling in for an injured Ivan Rodriguez.

In 14 games for Texas, McGinnis had 33 at bats. He compiled eight hits, four of those doubles.

For 1993, it was on to the Royals system, McGinnis playing as a non-roster player. He impressed early. In an exhibition against the University of Central Florida, McGinnis hit a two-run home run, a one-run single and a three-run double.

It was enough for Royals manager Hal McRae to look at the catcher a little closer. McGinnis hoped to take advantage of the opportunity.

"There are a lot things I can do to help this ballclub,'' McGinnis told The Orlando Sentinel after the game. "They thought enough of me to sign me. The rest is up to me."

McGinnis hit another home run later in the spring, but he was sent back to AAA. He didn't make Kansas City until April 1995. In three outings and five at bats, McGinnis didn't show the pop that he or the Royals wanted. He went 0 for 5.

He was also outright released. Picked up by Baltimore, McGinnis was sent back to the level he'd played at the previous seven seasons, sent to AAA Rochester. He played 20 games there, ending his career.