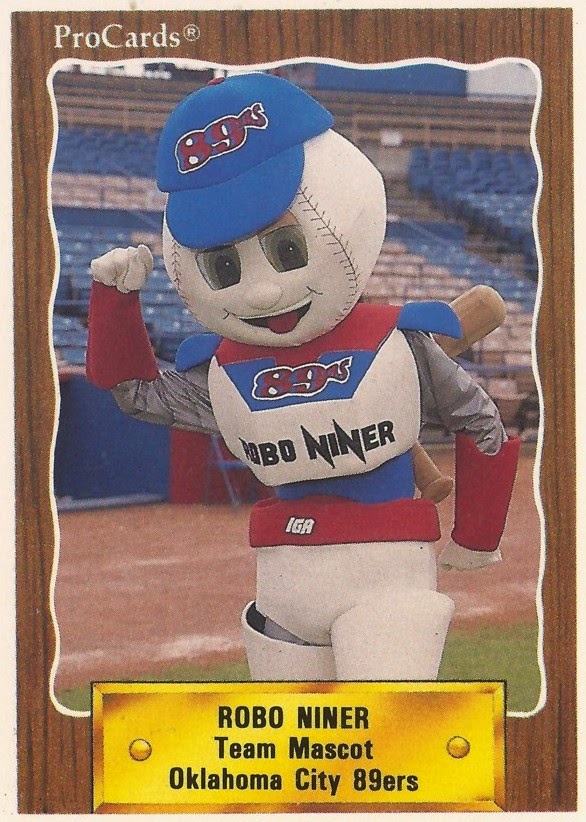 It was summer 1990 in Oklahoma City and Oklahomans were enjoying baseball.

That July, The Oklahoman recounted a day out at All Sports Stadium. Included in that account was Robo Niner.

"Toddlers run to Robo Niner, the 89ers' new, 'half man-half robot' mascot," The Oklahoman wrote. "Little hands tug on parents with desires of reaching the cartoonish fantasy character with a giant baseball head."

The Oklahoma City 89ers got a new mascot in 1990 and they were proud enough of him to put him in their card set.

If a robot - a late-20th-century machine - and an 89er - a late-19th-century homesteader - seemingly had nothing in common, the back of Robo Niner's card provided the needed back story.

His connection mainly came through the number 89.

According to Robo's card, the character is not actually from Oklahoma, or even from Earth. Robo Niner was from the planet "K."

On that team, Robo hit a staggering 89 home runs for the school, along with a very healthy .589 batting average. He also set a school record for stolen bases, but the exact number of steals was not included.

The thing about Robo's birth date, though, is it seems to leave little time for him to actually grow up and attend college to be signed by the 89ers. Also, they couldn't just have the 89ers mascot born, say, four months earlier in 1989?

The text on the card back concludes that Robo signed with the 89ers as a free agent in 1990 "and intends to delight fans for years to come!"

Judging by comments online, Robo mostly delighted. In December 1991, Robo was there at the Oklahoma City Mayor's Christmas Party.

Shadrick also pulled out a photo of Robo Niner and another Robo, Robo Cop.

In 2005, the former home of Robo and the 89ers, All Sports Stadium, was demolished. One commenter on OKCTalk.com included Robo in his recollections as a kid.

"I have many memories from that stadium," poster OKCPulse wrote on OKCTalk. "It's strange to see All Sports Stadium get demolished, but it needed to happen. I'll never forget shaking Robo-Niner's hand ..." 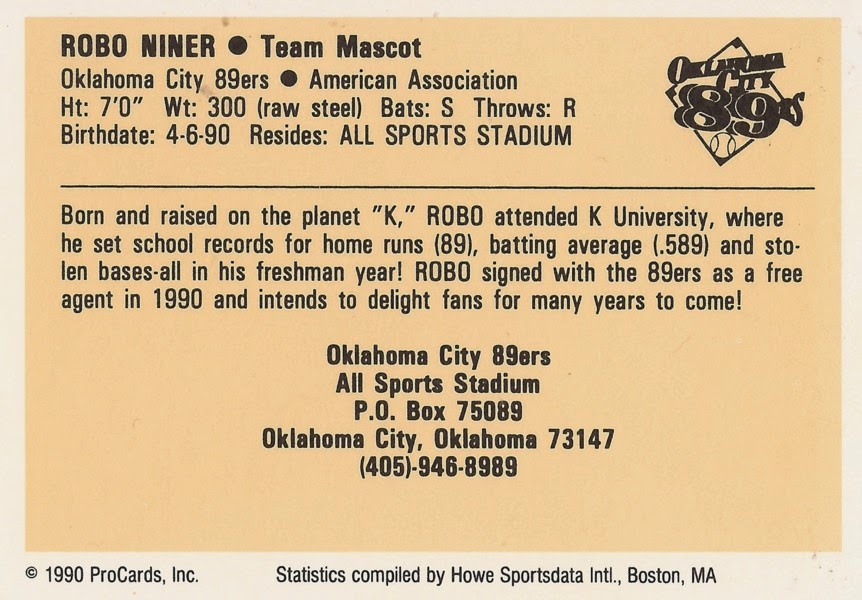